This is be the first time any company owned by Ambani has sought loan rescheduling from banks.

The company’s losses were mainly due to a continuous fall in gas production from Reliance Industries Ltd’s (RIL’s) KG-D6 block off Andhra coast, the company’s filings with the National Stock Exchange showed.

RGTIL, which owns and operates a 1,386-km gas pipeline connecting the Andhra coast with Gujarat, has received a sanction from public-sector banks to repay its principal loan by 2030-31, as against the current repayment schedule of doing so over the next four years. The company had a total debt of Rs 16,010 crore as of 2014-15.

RGTIL said the promoters had agreed to provide the necessary financial support, as and when required. 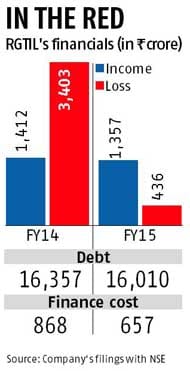 The loan restructuring for RGTIL comes against the backdrop of many Indian companies facing difficulties to repay loans in the infrastructure sector due to a slowing economy.

The pipeline company gets its business from RIL, in which Ambani owns a 45.24 per cent stake. Based on his stake in RIL, Ambani earned Rs 1,464 crore as dividend income for 2014-15 from Reliance.

In its filings, the company further said its operations were affected by a continued decline in natural gas production from the KG-D6 block. And therefore, lower pipeline capacity utilisation of the pipeline resulted in losses and erosion of net worth since 2011-12.

Reliance had in the past said its gas production fell due to “technical” reasons. The company has also sought higher gas price from the government which has been partially approved. As RIL’s gas production fell, it had a chain impact, with many power and fertiliser projects in the country curtailing production.

The RGTIL pipeline was an important cog in Ambani’s gas production and distribution plan. Two years ago, RGTIL had hived off its investment division as Reliance Industries Holdings Pvt Ltd, another unlisted company that Ambani owns.

Ambani had also invested Rs 1,575 crore in RGTIL in 2013. An email sent to RIL on Wednesday did not elicit any response.