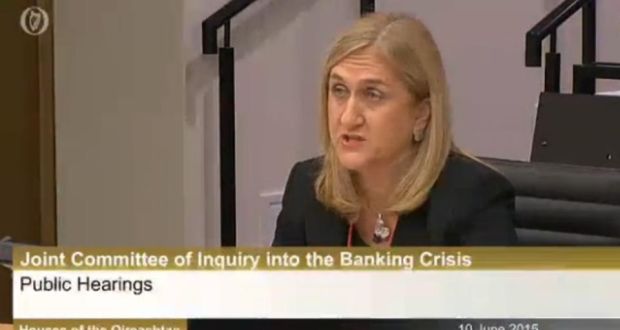 The acting chief executive of the Financial Regulator met the full board of Anglo Irish Bank after her appointment in January 2009 to relate her concern at a lack of co-operation by the then nationalised institution over certain issues being investigated by the regulator.

Speaking to the Oireachtas Banking Inquiry today, Mary O’Dea, who was acting CEO of the Financial Regulator for 12 months from January 2009, said she also reported certain transactions relating to Anglo to An Garda Síochána.

“My recollection is that the relationship with some banks was somewhat strained at this time,” she said. “Sending a full investigative team into Anglo elicited what I believed was a defensive response, and early in the investigation I required the full Anglo board to meet with me in relation to my concern about the level of co-operation.

“Similarly, the reporting of a suspicion to the Gardaí on the so called back-to-back loan issue [between Anglo and Irish Life & Permanent] meant that relations were tense with the institutions involved.”

Ms O’Dea said “some parts” of her investigations as acting CEO were reported to the Garda at an “early stage” while other strands continued throughout 2009 with a view to exercising the regulator’s own administrative sanctions regime in respect of regulatory breaches that might be uncovered.

“At the end of 2009, I sent a detailed letter to the Garda Commissioner seeking a mechanism to ensure that the use of the regulator’s enforcement powers did not jeopardise any action on the part of the Garda,” she said. “I understand that some of these matters are now subject to legal proceedings and I cannot therefore comment further.”

Ms O’Dea said that in general, the banks were working in a “crisis environment”, trying to accumulate liquidity while absorbing new regulatory and reporting requirements.

“Contact at various levels was more frequent, dialogue was direct, so tensions were high at times,” she said.

In March 2009, Ms O’Dea circulated a written procedure to all staff relating to the escalation of “significant issues”.

“The purpose was to ensure that staff would feel more comfortable to highlight their concerns in areas where there might be disagreement,”

she explained. “However, I would also comment that by 2009, so many things that were unimaginable had already happened so that no contrarian view was ruled out. “

Ms O’Dea described her time as acting chief executive as a “difficult and challenging year”, requiring action and decisions on a number of fronts including bank funding and liquidity, bank governance, investigation of legacy issues and putting a system in place to manage the bank guarantee scheme, all in the context of a period when the organisation itself was in crisis.

As the financial crisis continued throughout 2009, and the liquidity and capital positions of the guaranteed banks remained stressed, it was clear that a more permanent solution would be required, she said.

Anglo Irish Bank was nationalised in January 2009 and the government announced capital injections of €3.5 billion each for AIB and Bank of Ireland in return for preference shares.

In June 2009, €4 billion of capital was announced for Anglo. By the end of 2009, Anglo needed further capital, and the State committed to providing this, ultimately as a promissory note in March 2010.

“Confidence in the regulatory system was at an all -time low,” she said.

“We engaged with and challenged the banks regarding various revisions of their business models throughout 2009 as we considered how best to maintain a viable banking system,” she said. “We were concerned with a number of areas within those plans – for example, a number of them had the same source of profitability – so we challenged the various assumptions underlying the plans.”

Ms O’Dea acknowledged that the system of supervision and regulation that had been in place internationally and in Ireland before the financial crash was “inadequate” and needed to be overhauled to protect depositors’ money, to protect the State’s guarantee, and to give some level of confidence so as to avoid a large scale, unmanageable run on the Irish banking system.

She said that from the end of January 2009, the Financial Regulator “significantly increased” the volume and frequency of periodic reporting by each bank in the areas of profitability, impairment provisioning, regulatory capital, liquidity, lending and governance.

The resulting information formed the basis of a comprehensive quarterly report to the minister for finance.

“We introduced a model of supervision that was significantly more intrusive and that required active and frequent engagement with the domestic banking sector,” she told the committee.

In order to manage the crisis more effectively, Ms O’Dea increased resources, recruiting an additional 20 staff including specialists in areas where there was a deficiency such as credit and liquidity analysts.

“By the end of 2009 there were over 75 staff in banking supervision, 35 of whom were dealing with domestic credit institutions,” she said.

Some 73 “separate engagements” were held with banks during her time as acting CEO.

“In 2009, 10 administrative sanctions enforcement actions were concluded that resulted in fines ranging from €7,500 to €2.7million, and one disqualification direction,” she added.

In terms of the new regulatory structure that now exists in Irish banking, Ms O’Dea said that while it was an “appropriate response”, it is “too early to tell how it is functioning in practice”.

Ms O’Dea added that it was important that the State did not “lose sight of other areas in the financial sector which have the potential for harm”.

“Ireland is home to a wide range of financial services firms ranging from large banks and insurance companies to collective investment schemes and smaller financial intermediaries. While the role of banks in the broader economy is unique and, as such, the repercussions of a banking failure are enormous, it is also true that other areas of the financial sector have the potential to cause detriment – this is why they are regulated by law.”

Ms O’Dea joined the Central Bank in 1987. She was the Financial Regulator’s Consumer Director from 2003 to July 2011 and sat on the board during this period. She now holds a postion with the World Bank.

The Committee of Investigation into the Banking Crisis, or the Oireachtas banking inquiry, was set up in November 2014 to investigate the political, economic, social, cultural, financial and behavioural reasons behind the banking crisis experienced by Ireland, as well as the preventative measures that have been put in place since.

Ms O’Dea sent in a team of investigators to Anglo after taking on her role as acting CEO and was “surprised at the attitude” of the bank towards her staff.

Anglo used stenographers during the inspections, something that Ms O’Dea had never encountered before. “It slowed the process for us,” she said.

Ms O’Dea said there were also claims of legal privilege in relation to certain documents, which “very much slowed the process”.

She called a meeting with the full board to outline her concerns about these issues and the bank’s co-operation “improved after that”.

Before the crash in late 2008, Ms O’Dea said she did “buy into” the principles-based, or so-called light touch, regulation that existed in Ireland at the time.

“It was seen internationally as the best model at that time,” she added.

Ms O’Dea said the Financial Regulator received around 500 calls a day around the time of the bank guarantee in September 2008 from consumers who were concerned about their savings in Irish banks.