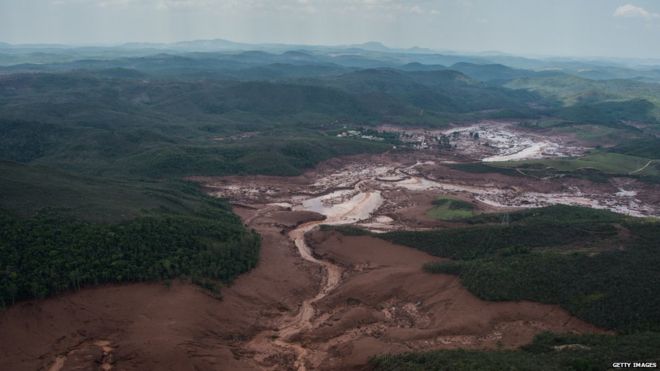 BHP Billiton and Vale have agreed a deadline of 30 June to consolidate and settle claims resulting from Brazil’s Samarco dam disaster in 2015.

The biggest is a $47.5bn (£38.6bn) civil claim brought by Brazil’s federal prosecutors, the companies said.

Under the deal, the firms will provide an initial $681m in compensation.

The collapse of the dam, containing waste from an iron ore mine, killed 19 people and created a river of millions of tonnes of toxic waste.

It killed 19 people and is Brazil’s worst ever mine disaster.

The agreement, between the companies and prosecutors, will see experts appointed to advise the federal prosecutors on the impacts of the dam disaster and any changes that might be needed to social and environmental remediation programs agreed last May.

It does not cover the potential size of the final liabilities to be agreed by the end of June.

BHP spokesman, Paul Hitchins, said the settlement simplified matters: “This spells out how and when we are going to settle this with the prosecutors.

“Up until this time we had all these different courts hearing the case. This consolidates all that.”

The companies said they still had not agreed how and when the mine would be able to re-open.

They said any restart was subject to separate negotiations and would only happen once it was safe to do so and economically viable.

It also needed the support of the devastated local community.