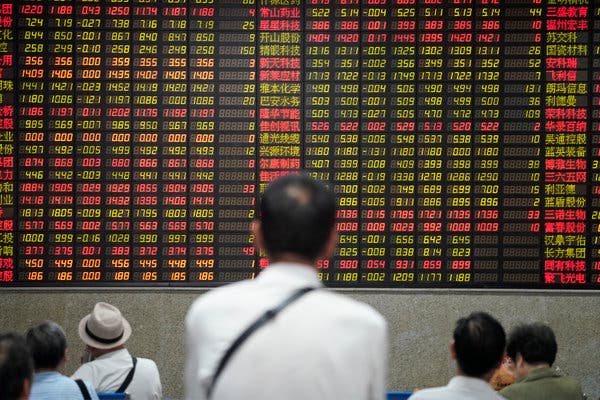 SHANGHAI — On the surface, China’s economy is humming along smoothly. It’s the numbers behind the numbers that point to mounting challenges for the world’s other economic superpower.

The Chinese government on Monday reported that the economy grew 6.7 percent in the three months that ended in June compared with a year ago. That is pretty close to the rate that China has reported quarter after quarter over the past two and a half years. The pace puts it comfortably within its target of achieving growth of around 6.5 percent for the full year.

Those figures belie warning signs elsewhere. More detailed data show weakening investment in infrastructure and a slowdown in spending by China’s usually ebullient consumers. Private Chinese businesses complain that government efforts to tame debt have made it hard for them to get money. A tiny but growing number of Chinese companies have defaulted on their debt. The currency has lost some of its value. Chinese stocks are in bear market territory.

It may just get tougher from here. The United States has started a trade war with China, and by this autumn it could widen the conflict by hitting another $200 billion in Chinese goods with tariffs. While the Chinese have made progress diversifying their economy, the country still relies heavily on making and exporting toys, clothes, car parts and other goods to the United States and elsewhere.

China has options, but they have drawbacks. China could put more money into its banking system, which would juice growth. It could also ramp up spending in big projects like highways and airports. But both could undermine its efforts to break the country’s addiction to borrowing.

China’s spending on bullet trains, highways and bridges has long driven its growth. That spending has kept steel and concrete factories in business and helped provide paychecks to millions of workers.

Now that investment has begun to falter.

China’s annual infrastructure investment growth, which has consistently risen about 20 percent in recent years, has slowed to less than half that rate so far this year. That slowdown has coincided with renewed pledges by Beijing to tackle China’s debt problems, which stem from big spending by local governments and big Chinese state-controlled companies.

Signs of a deliberate slowdown were apparent during the second quarter. In China’s sparsely populated Xinjiang region in the far west, local and regional agencies halted or ordered immediate reviews of the viability of many projects.

Several other inland provinces, plus coastal Shandong Province, ordered halts or financial reviews of infrastructure projects about the same time. Particularly targeted for suspension have been projects that were being built by so-called public-private partnerships.

China now appears to be splitting the difference. In a complex edict on Friday, it forbade cities below a certain size from building subways systems, even as it indicated that delayed projects in larger cities could go forward with some limits.

China has successfully turned to its consumers to pick up the slack during slow times. Retail sales have boomed as an increasingly middle-class China buys more cars, smartphones, appliances, dairy products and a wide variety of other goods.

That boom may be easing. Retail sales growth slowed earlier in the quarter, official data showed, though it picked up a bit in June.

The slowdown may have a number of underlying reasons, like a decline in consumer lending for cars and a flattening of the market for smartphones. But China’s bean counters may also be missing some vibrant activity. They may not, for example, capture the full scope of online shopping.

Consumer pessimism over China’s economy may be overstated, according to the China Beige Book, a quarterly survey of big businesses across China. The Beige Book survey suggested that the government’s statisticians might have overestimated retail sales growth in previous years, and are now compensating with low estimates of current sales.

“The current weakness in official data is better understood as a lagged reflection of past softness,” the Beige Book’s second-quarter report said in late June. “The retail sector may be seeing a turn higher, with profit and investment growth improving.”

In the end, it isn’t clear whether the economic growth figure tells us much about the state of the Chinese economy. In fact, research shows that China has been both overestimating and underestimating growth for years.

One new analysis suggests that the Chinese economy grew even faster last year than official data showed. The analysis, by professors at Cambridge University in Britain and two Dutch universities, was based on sales and gross margin data from 150 of China’s biggest companies.

How is it possible that China understated its own growth last year? The analysis also indicates that China was over-reporting growth in 2015 and 2016, when China suffered a stock market crash and a disorderly currency devaluation. So some of the growth last year may have been catch-up — and that has now faded.