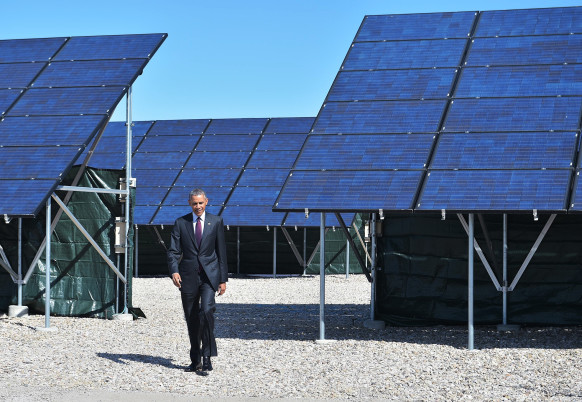 NO SO LONG ago, amid notorious boondoggles like the Obama administration’s backing of solar manufacturerSolyndra, clean tech became a no-go sector for tech investing. But as plunging prices have brought solar power into the mainstream, renewable energy is seeing, well, renewed interest.

In February, the Obama administration announced its so-called Clean Energy Investment Initiative, a program that was seeking to generate $2 billion in commitments from the private sector to help spur clean energy innovation.

Just four months later, it seems, investors have willingly answered the call twice over amid rebounding interest in renewable energy.

The Obama administration said today that a collection of philanthropic groups, universities, and for-profit institutions have committed $4 billion to invest in clean energy. These are investments that might not fit in the average investor’s portfolio. Instead, the money will fund things like solar, wind, and fuel cell technology, the type of potentially transformative innovation that all too often never sees the light of day because funding dries up.

The announcement is light on details as to what, exactly, these new innovations might be, but along with the funding, the administration has set up a number of advisory groups both inside and outside of the Department of Energy that will work to identify promising technology.

“Taken together, today’s announcements will help ensure that more climate innovations make the leap out of the laboratory and into the global marketplace,” the White House says.

Global investment in clean energy has slowed in recent years, thanks to falling oil prices that took the focus off of renewable sources like solar and wind technology. But in 2014, renewables showed their first signs of a rebound in years, according to a Bloomberg New Energy Finance report. Now, it looks like the White House is capitalizing on this turnaround.

Many of the executive actions involved in today’s announcement seek to provide more information to would-be impact investors on what types of technology the Department of Energy is most interested in. For that reason, the DOE set up a group called the Clean Energy Impact Investment Center, which aims to make DOE initiatives more understandable to investors as well as share research on clean energy technology conducted by the National Laboratories.

As energy secretary Ernest Moniz told reporters, “The idea is to make the department’s resources … including of course our 17 national laboratories … more readily available to the public, including the mission driven investors.”

The Obama administration does not have a spotless record, of course, with regard to big bets on clean energy. The DOE’s $528 million loan to Solyndra was widely considered to be misguided after the company filed for bankruptcy. But with this program, The White House is asking leaders in every corner of the private sector to step up and make these bets themselves. The fact that so many organizations, ranging from The Sierra Club to Goldman Sachs, have taken up the challenge reflects just how dire and widespread the need to address climate change really is—and the potential money to be made from new tech that addresses its impacts.