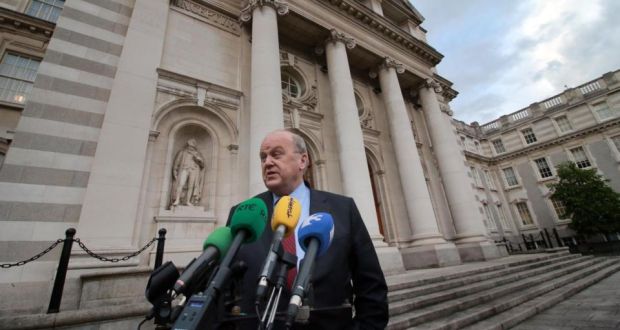 ‘At arm’s length, on a commercial basis.” The phrase was repeated again and again when the then Fianna Fáil/Green Party government nationalised Anglo Irish Bank. This was the way the bank would operate, according to a government that was under pressure not to be seen as controlling the treatment of Anglo’s customers.

Now, more than six years on, we see how the current Government is under fire for not closely enough controlling the Irish Bank Resolution Corporation (IBRC), the bank formed to run down Anglo and Irish Nationwide.

In hindsight, there is a bigger story here. In May 2011, shortly after the Coalition took office, the team controlling banking on behalf of the State moved from the National Treasury Management Agency (NTMA) to the Department of Finance. This was portrayed at the time as an administrative measure. It now looks like an attempt to tighten control on what the banks were up to.

In the case of IBRC, this led to a wave of emails and correspondence, with the department accusing IBRC of ignoring its wishes, and particularly its desire to wind down IBRC’s activities as smartly as possible. In return, the then IBRC chairman Alan Dukes said that the IBRC team just wanted the space to get on with it.

It was in the midst of these tensions that the big decisions to be examined by the commission of investigation were made. Stepping back a bit from the turmoil, here are the things that I would like to know:

1 Why was Siteserv allowed to manage its own sales process? Siteserv owed IBRC more than €150 million and was in dire straits. Why, then, were the company and its advisers allowed to manage the sale process themselves, rather than the bank taking control, by appointing a receiver, for example, or consenting to an examiner being appointed? The reason given is that Siteserv had been brought down by expansion but that its core business remained sound and that any public move by the bank would lead to it losing contracts with businesses, government and local authorities. The commission should probe this decision and the subsequent one to exclude trade competitors from the bidding process.

2 Why did Siteserv shareholders get a payoff? The review will look at all the financial aspects of the Siteserv deal, including the €119 million write-down of the original loan value, resulting from the bid accepted from Denis O’Brien’s company. Taxpayers were in line for a hit here, for sure, but why were Siteserv shareholders paid €5 million as part of this? IBRC’s chief executive at the time, Mike Aynsley, said in an interview with the Sunday Business Post that having to make this payment was “distasteful in the extreme” but was done to ensure shareholder approval. But €5 million still seems an awful lot to pay shareholders in such circumstances.

3 Were the department’s concerns about other asset sales and borrower relationships legitimate? The Department of Finance raised concerns about the sale of a number of other assets, notably the Apthorp, a posh apartment tower in Manhattan. An internal IBRC manager raised concerns that the provision made by the bank on the loan had been reduced to bring it close to the sale value.

The department also raised concerns about IBRC’s dealings with the Quinn Group (the reasons were redacted), its relationship with Paddy McKillen (also largely redacted) and about attempts to sell its wealth management division.

4 Did the IBRC do special deals with borrowers? Using Dáil privilege, Catherine Murphy TD said her information was that Denis O’Brien had negotiated a deal with former IBRC management to extend his loan repayment term and that he had benefited from a low 1.25 per cent interest rate on his loans. O’Brien has said her information is incorrect. Were such a rate to have applied, it would indeed have been low. Banks would normally look for a margin of between 1.75 per cent and 2.5 per cent on their cost of raising funds for even the best borrowers. This would suggest that the “performing” IBRC borrowers would have been charged somewhere in the 3 to 4 per cent range. It would be a surprise if any big borrower paid less, on average, than this.

The commission will also look at other agreements made on loans, such as deferring or spreading out repayments over a longer period. Here, Murphy’s information was that O’Brien had a verbal agreement to extend his loan repayments, though this is disputed by IBRC management. The commission should be able to examine how lending terms were dealt with and whether there were any obvious inconsistencies. After IBRC was liquidated, it is understood that, in general, a 12-month extension was the most that was offered to borrowers, and it would be most surprising if any borrower got longer. O’Brien later refinanced his loans.

The difficulty facing the commission of investigation is that a lot of things will not be black and white. We will never know whether a better deal could have been achieved if another approach had been taken to selling Siteserv, or precisely why individual borrowers were treated as they were. A lot will come down to second-guessing commercial judgment. But getting the facts out in the open, so far as possible, is a vital exercise in itself.