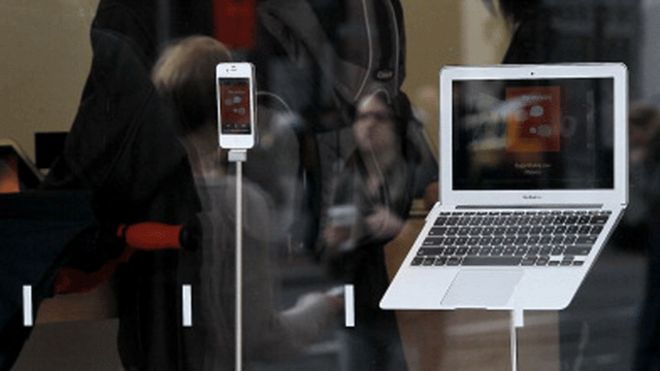 Cybercriminals are increasingly targeting Apple devices and 2016 will see a rise in attacks on its operating systems, security experts suggest.

According to security firm Symantec, the amount of malware aimed at Apple’s mobile operating system (iOS) has more than doubled this year, while threats to Mac computers also rose.

Security firm FireEye also expects 2016 to be a bumper year for Apple malware.

Systems such as Apple Pay could be targeted, it predicts.

Apple is an obvious target for cybercriminals because its products are so popular, said Dick O’Brien, a researcher at Symantec.

While the total number of threats targeting Apple devices remains low compared with Windows and Android, Symantec is seeing the range of threats multiply.

Last year, it was seeing a monthly average of between 10,000 and 70,000 Mac computers infected with malware.

“This is far fewer than Windows desktops and we don’t want to scaremonger. Apple remains a relatively safe platform but Apple users can no longer be complacent about security, as the number of infections and new threats rise,” said Mr O’Brien.

The number of unique OS X computers infected with malware in the first nine months of 2015 was seven times higher than in all of 2014, its research found.

A significant amount of this spike is accounted for by so-called greyware – applications that may not have malware attached but can still be annoying to users, by serving up unwanted ads or tracking their web-browsing habits.

Symantec also found seven new threats aimed at Apple’s mobile iOS platform, with jailbroken devices – those that have been unlocked – being particularly vulnerable.

And hackers are also increasingly targeting corporations, where Mac use is now more prevalent.

A corporate espionage group known as Butterfly which attacked multi-billion dollar companies in 2015 developed malware tools that attacked both Windows and Apple computers.

Traditionally iOS has been seen as a more secure platform than Android because of the more closed community that Apple runs for its apps but that is changing, according to FireEye.

While it found that the vast majority – 96% – of mobile malware is targeted at Android devices, iOS is no longer immune.

According to Bryce Boland, chief technology officer at FireEye, attackers are increasingly “finding ways into Apple’s walled garden, and that will ramp up next year”.

FireEye recently discovered that XcodeGhost, iOS malware that Apple acted quickly to remove from its app store, had found its way into the networks of 210 US businesses.

The attack was thought to be the first large-scale attack on Apple’s app store.

The introduction of new payment systems, such as Apple Pay, will add a financial incentive for hackers, making it worth their “time and effort” to develop new malware, FireEye said.

Mr O’Brien said: “We haven’t yet seen any threats targeting Apple Pay but anything that involves a financial transaction will be of interest to hackers.”