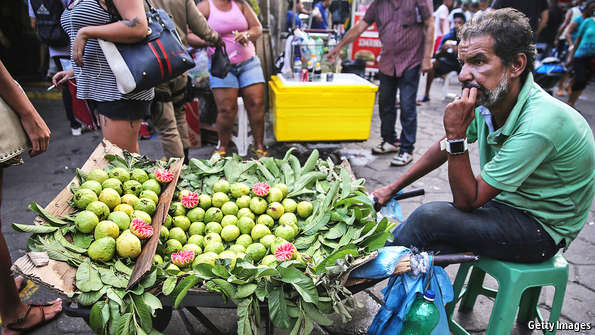 PEOPLE who live in São Paulo say their restaurants are the equivalent of Rio de Janeiro’s beaches: the main sites of recreation and refuge from the teeming city. These days they are emptier than usual. When they eat at home, paulistanos are switching from beef to chicken and vegetables, which are cheaper.

This change in dietary habits is caused by the gloom that has enveloped Brazil for much of the past year. A recession is looming (see chart 1). The economy shrank by 0.2% in the first three months of 2015, and by 1.6% between that period and the same quarter a year before. Employment and real incomes are contracting (see chart 2); interest rates and inflation are rising. The country feels leaderless: the president, Dilma Rousseff, has been weakened by a mammoth scandal at Petrobras, the state-controlled oil company, as well as by the economy’s dismal performance.

And yet Brazil’s embattled government is making progress. In particular, it is beginning to restore the economic credibility that Ms Rousseff squandered during her first term as president, from 2011 to 2014. She has given strong backing to her budget-cutting finance minister, Joaquim Levy. The Central Bank has turned serious about fighting inflation since she was re-elected in October. Brazil’s obstreperous Congress, which is dominated by unreliable allies of the government and outright opponents, has so far not managed to thwart them. “This is Brazil under new management,” says Marcelo Carvalho of BNP Paribas, an investment bank.

Mr Levy’s top priority, to hold on to Brazil’s investment-grade credit rating by cutting the budget deficit, came closer to realisation last week when Congress approved cuts to welfare spending, in particular to unemployment insurance and to survivors’ pensions. This should save the government 8 billion reais ($2.6 billion) in 2015. Earlier he had slashed 70 billion reais from planned discretionary spending for 2015, the biggest such cut in history, and raised taxes, including fuel duty, which should yield 26 billion reais in revenues this year.

Mr Levy has not got everything he wanted. A bill to end costly payroll-tax breaks faces opposition in Congress. Legislators tacked on to the welfare reform an innocuous-sounding measure that would change how pensions are calculated for civil servants who retire early. It would double the government’s pension bill to 15% of GDP in less than a decade, calculates Fabio Klein of Tendências, a consultancy. Ms Rousseff is expected to veto it.

Few analysts expect Mr Levy to hit his main targets, a primary surplus (before interest payments) of 1.2% of GDP this year and 2% in 2016. This year’s surplus is likely to be little better than half what he promised, says Mansueto Almeida, a public-finances expert. But that may be enough to satisfy credit raters. The policy shift under Mr Levy has been bigger than expected, says Lisa Schineller of Standard & Poor’s.

Financial watchdogs are equally impressed with Alexandre Tombini, the Central Bank’s governor, who has not allowed the threat of recession to deter him from fighting inflation, currently above 8%. On June 3rd the bank raised interest rates by half a percentage point, to 13.75%. Mr Tombini’s goal is to bring inflation down to 4.5%, the midpoint of the bank’s target range, by next year. That may require further rises in interest rates.

In the near term, the diligence of Messrs Levy and Tombini will further empty São Paulo’s restaurants. The economy is even weaker than it looks at first sight. Investment, already low by the standards of emerging economies, dropped for the seventh quarter in a row in the first three months of 2015. Household consumption fell for the first time year on year since Ms Rousseff’s left-wing Workers’ Party came to power in 2003. Without a reduction in imports, the annual decline in the economy would have been even bigger. Mr Levy has made most of his savings by raising taxes, which will depress today’s growth, and by slashing investment, which will hold back tomorrow’s.

Restoring credibility is not enough. Brazil must also get rid of “supply-side bottlenecks”, noted Christine Lagarde, the IMF’s chief, who visited Brazil in May. They include an enterprise-crushing tax system, inadequate infrastructure and antiquated labour laws. Brazil’s new managers have barely begun to deal with all that.