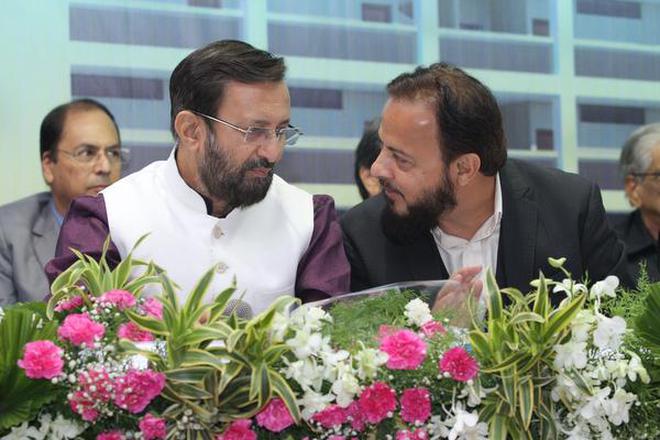 Education is the national agenda of the Narendra Modi-led BJP government and it would leave no stone unturned to ensure its delivery to every child irrespective of caste, creed and religion, said Union Minister of the Human Resource Development Prakash Javadekar here on Sunday.

Mr. Javadekar was in the city to inaugurate the Taleem o Tarbiyat (education through training) conference organized by the Anjuman–I–Islam, the premier Muslim educational conglomerate and educational trust which strives for the educational uplift of the minority community.

The theme of the meet was how holistic education could transform and energize communities and aid in the character building of youth.

“Taleem [education in Urdu] today is the magic key for the prosperity of any nation and has the power to change the face of countries, societies and villages. In this view, all communities should put the strongest emphasis on it. They must shoulder part of this responsibility of lending a helping hand in government endeavours,” said the minister, drawing attention to the Modi government’s thrust on ensuring the provision of education to every child.

Urging communities to play a proactive role in making a success of the myriad government schemes launched for students, he exhorted minority community leaders to make sure that the schemes reached their end beneficiaries.

“At the same time, one cannot stress too highly on the importance that each community should accord and be receptive to innovative ideas emanating from the younger generation,” Mr. Javadekar said, implying that education was the key to transform the face of the minority community.

Zafar Sareshwala, the Chancellor of Maulana Azad National Urdu University and founder of the ‘Taleem o Tarbiyat’ initiative, remarked that the agenda behind the program was to encourage different communities, particularly the Muslim, to equip themselves with knowledge and skill through education with a an accent on ethical values.

“The need of the hour is to accelerate the process of bringing our community into the mainstream through efficient, effective and comprehensive use of the process of education (Taleem) and training (Tarbiyat). We need to leverage these two elements for the best use of the younger generation in character building,” said Mr. Sareshwala, a Gujarati Muslim widely perceived to be the ‘face’ of Prime Minister Modi’s Muslim support base.

“As Muslims are the most socio-economically backward community in the country, I urge the youth and particularly women to engage with the government and take benefit of diverse welfare schemes,” he remarked.

“One of the purposes of this initiative, which we hope to develop as a movement, is to spread awareness about the possibilities that a good Taleem offers and of the large number of schemes and incentives available both through the Central and State governments. We observe that scores of young boys and girls from the minority community opt out for want of sound advice while making critical career choices. They are often flummoxed with fundamental questions as where to study,” Mr. Sareshwala commented, adding that another cardinal aim of the programme was to try and fill this gap.