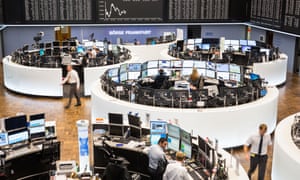 Major European equity indexes climbed to new highs in thin trading on Monday, with strong manufacturing reports from the region lifting sentiment on the first trading day of 2017.

Italy’s FTSE MIB index closed up 1.7%, rising to its highest level since January 2016. Germany’s Dax was up 1% after reaching its highest point in nearly 17 months, while France’s Cac gained 0.4% after a 13-month peak earlier in the day.

The eurozone’s blue-chip Euro Stoxx 50 index was up 0.6% and at the highest level since December 2015, with a brighter macroeconomic picture helping the broader market. The pan-European Stoxx 600 rose 0.5% and held at one-year highs. British and Swiss markets were closed.

IHS Markit’s 2016 manufacturing purchasing managers’ index for the eurozone registered 54.9 in December, its highest since April 2011. The 50 mark separates growth from contraction; in November the figure was 53.7.

German manufacturing growth reached its highest in almost three years, driven by rising demand from Asia and the US. French manufacturing hit a five-and-a-half-year high, and Italian manufacturing activity grew at its fastest rate since June.

Koen De Leus, chief economist at BNP Paribas Fortis, said: “It’s nice to see some good economic numbers on the first trading day of the new year. It has improved sentiment and could help the market to set new highs in the coming months.

“However, the road ahead looks bumpy because of several political risks in Europe. Overall, I am positive on European stocks this year as valuations are quite attractive compared to the US and company margins are slowly improving, helped as well by the cheap euro.”

Italian shares were also boosted by a rally in the country’s lenders. The Italian banking index rose about 2%, supported by a 9% jump in Banco BPM on the first day of trading for the newly merged bank.

Banco BPM said on Monday that the new lender, created after a merger between Banco Popolare and BPM, started with a share capital of €7.1bn (£6bn). Other Italian banks were also up, with shares in UniCredit, UBI Banca and Mediobanca up between 2.1% and 3.5%.

Trading was thin, with volumes at 8% for the Cac index and 13% for the euro STOXX 50 of their 90-day daily averages in the first two hours of trading.

Britain’s blue-chip FTSE 100 index closed 2016 at a record high on Friday after clocking a yearly gain of 14.4%, the best performer among major European stock indexes, with a sharp decline in sterling after the vote to leave the EU helping exporters and stronger metals prices boosting miners.