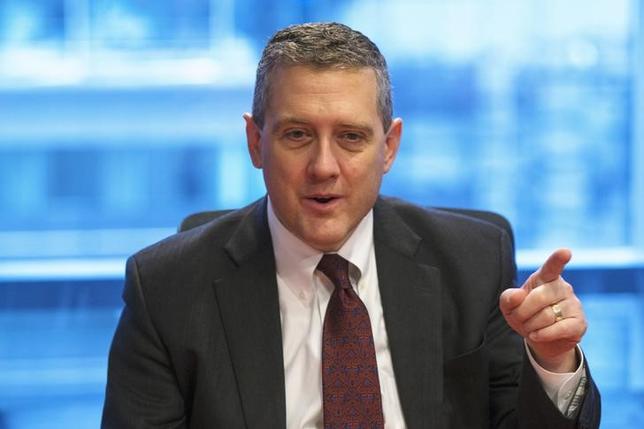 Since the dramatic fall in oil began in 2014 Fed officials have insisted the impact on U.S. price levels would be temporary, bottoming out at some point and allowing inflation to rise to the Fed’s 2 percent target.

Bullard said he has so far been willing to look beyond a slip in expectations as likely passing. But he is now worried the plunge in oil has unmoored inflation expectations as well, a fact that would make it more difficult for the Fed to lift inflation to its 2 percent target and could force officials to rethink the four quarter-point rate hikes expected this year.

“We are 18 months into this and I am starting to wonder if my story is the right one,” Bullard said. “For me inflation expectations are a key factor and if they continue to decline I would put increasing weight on that.”

He said he still thinks that continued strong job creation would “trump” weak inflation and a slowdown in the growth of gross domestic product. The outlook for four rate hikes still seems “about right,” Bullard said.

But, coming from a Fed member who argued for an earlier rate hike and who is considered to be on the hawkish end of the spectrum, Bullard’s comments reflect the depth of concern at the Fed that it may struggle to meet its inflation goal given the state of the global economy.

The Fed raised rates in December in the face of low unemployment and expressed “reasonable confidence” that inflation would increase. Since then oil has slipped again, and U.S. equity markets have nosedived amid a shift in global perceptions about the future of the Chinese economy.

A second hike is not expected until at least March.

Bullard said that in general he still feels low oil prices will prove a “bullish factor for the U.S.” that supports consumer spending.

But he said both market-based and long-term measures of inflation expectations have been declining, and their continued fall “is becoming worrisome.”

Household and business expectations about inflation are considered a key economic variable that can pull the rate of inflation lower, and serve as an expression of lost confidence in the central bank’s ability to reverse it.

Bullard is a voter on the Fed’s rate-setting committee this year.