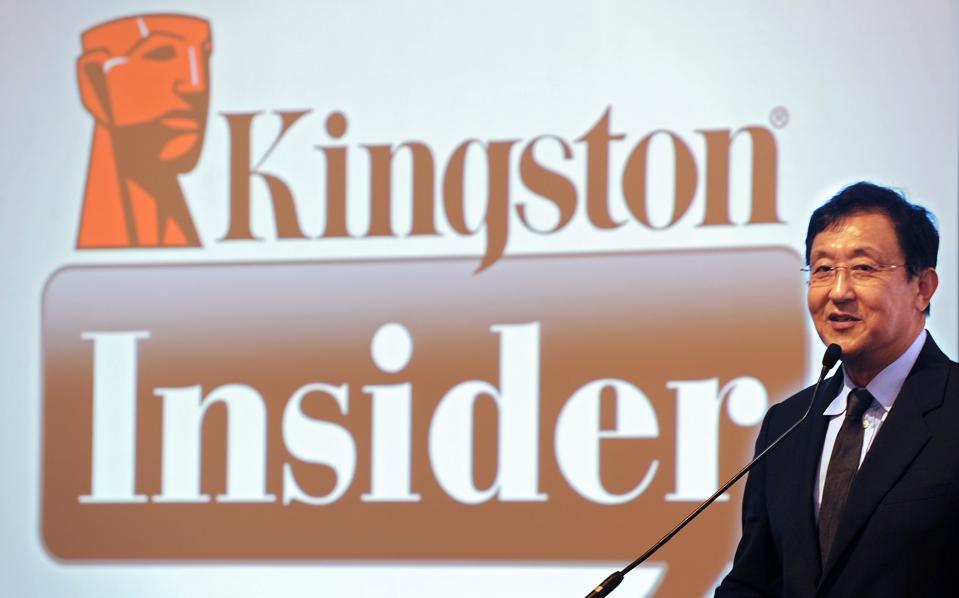 Immigrant entrepreneur and CEO John Tu co-founded Kingston Technology after his sister sponsored him for immigration. Tu and fellow immigrant David Sun rewarded their U.S. employees with large bonuses after the sale of 80% of the company. They later bought back the 80% share of Kingston. (INDRANIL MUKHERJEE/AFP/Getty Images)

John Tu created wealth, shared that wealth with his employees and demonstrated people can achieve the American Dream while also fulfilling the dreams of others.

Immigrant entrepreneurs possess relatively few options for starting a business and remaining in the United States. There is no startup visa that allows individuals to receive permanent residence specifically for starting a business. Once someone acquires permanent residence (a green card) he or she has the freedom to start a business in America. That is why the stories we hear about successful foreign-born entrepreneurs come almost exclusively from individuals sponsored by an employer or family member. John Tu is a great example of this.

John Tu was born in China in 1941, where he lived with his parents and sisters. He describes himself as a mediocre student unable to attend the best Chinese colleges. He was denied a visa to the United States and instead applied to a college in Germany, where in 1978 he earned a degree in electrical engineering.

“My dream of coming to the United States persisted,” said John in testimony before the Senate Subcommittee on Immigration. He recalled visiting his sister, who was living in Boston. She had come to America as a student and married a U.S. citizen born in Taiwan. That trip reignited his dreams. “My experience brought me to the conclusion that in the U.S. one can be anything he wants. I decided right then that I would find a way to make my home in America.”

His sister, who became a U.S. citizen, sponsored John for immigration through the immigrant preference category for the siblings of U.S. citizens.

As someone willing to take a chance on a new country, it’s not surprising John Tu quickly became an entrepreneur. He started a one-man gift shop in Arizona, where his sister had moved to, and sold collectables imported from China. A few years later, John ventured into commercial real estate, eventually buying a condominium in Los Angeles.

In California, he met David Sun, his future business partner, who also was born in China. In 1982, John Tu and David Sun started a computer hardware company called Camintonn Corporation. They later sold the company to AST Research, with each man earning about $1 million.

But a year later, John and David lost almost everything. Their broker, a trusted friend, invested poorly, which caused their savings to be nearly wiped out in the October 1987 stock market crash.

John Tu and David Sun picked themselves up and did what entrepreneurs do best – they started another business. Their new company, Kingston Technology, sought to fill a niche in the marketplace for computer memory products. “Kingston soon began developing memory products for a variety of PCs and thriving beyond either of our expectations. It is ironic that from the biggest financial failure came my most successful venture,” said John.

The company grew to over 500 U.S. employees and by 1996 was valued at $1.5 billion. Not surprisingly, this attracted the interest of buyers. That year, John and David sold 80% of Kingston to Japan-based Softbank Corp.

While the sale initially made news, it is what John Tu and David Sun did with the proceeds that generated worldwide attention: The two men set aside $100 million in profits from the sale and awarded bonuses to their American employees, something virtually unheard. In many cases, the bonuses ranged from $100,000 to $300,000.

This decision changed the lives of those working at Kingston, allowing many to fund dreams for themselves and their children. “The bonus meant a great deal to the employees, for some it meant ridding themselves of debt, for others a down payment on a house, and for one person the opportunity to return to college and finish his education,” said Kingston employee Gary McDonald. He decided to use the bonus money to fund schooling and assistance for his four children, two of whom had special needs, including one with autism. “Without the bonus it would have been much more of a financial struggle,” he said.

Fate intervened and in July 1999, for business reasons, Softbank decided to sell its 80 percent share in Kingston back to John Tu and David Sun for less than half of the original sale price.

Today, Kingston is “the world’s largest independent manufacturer of memory products,” according to the company. Kingston employs more than 3,000 people around the world and maintains its headquarters in Fountain Valley, California. It has garnered a number of awards, including Fortune magazine’s list of the “Best Companies to Work for in America.” John and his company Kingston contribute to many charitable causes.

John Tu remains CEO of Kingston Technology. I met John back in 1997 when he came to Washington, D.C. to testify at a Senate hearing on immigrant entrepreneurs. He was accompanied by a number of people from Kingston and I was struck by the mutual affection and respect between John and his employees.

When I listened to stories about the bonuses and the impact they had on the lives of the employees it made me suspect that economists underestimate many of the benefits of immigration. Further confirmation of that came a few minutes later when John had to excuse himself. Upon returning, he told me that the next day was April 15th and his accountant needed authorization to pay the capital gains tax on the sale of the company. Think for a moment about the size of the capital gains tax paid by immigrants John Tu and David Sun on the sale of a company they started from scratch and that had become valued at over $1 billion.

In December 2017, the Associated Press reported, “The White House is embarking on a major campaign to turn public opinion against the nation’s largely family-based immigration system ahead of an all-out push next year.” However, inciting the public against foreign-born individuals is not a rational economic policy, nor does it conform to America’s tradition as a nation of immigrants.

Reducing legal immigration by prohibiting U.S. citizens from sponsoring for immigration close family members, such as siblings and adult children, would reduce both U.S. economic growth and labor force growth, according to a recent study from the National Foundation for American Policy. If such policies had been in effect years ago, John Tu would not have made it to the United States and the many Americans who have worked at his company, as well as their families, would have been much worse off.

“The reason I’ve been able to do what I’ve done is because of my sister,” John told me in a recent interview. “She became a citizen and sponsored me . . . If my sister was not allowed to sponsor me for immigration none of this success at Kingston and the many jobs we’ve created would have happened.”

John Tu does not consider himself unique. “I’m just one example of a family immigrant success story. Look at Silicon Valley and one can find many similar examples.”

At the end of his Senate testimony, John reflected on his and America’s immigrant journey: “I would have never had the opportunity to become so successful had I not come to America. I can tell you that I feel the founding fathers of America had the right idea: immigration has made this rich culture, this great environment of what is often called the melting pot.”

John Tu credits his success to America’s system and its society. “America gives you the opportunity to be who you are, to maximize your talent and achieve your dreams. I appreciate so much what this country has given to immigrants like me.”