Skip to content
ECONOMY
May 13, 2015 swarnali 0 Comments FIIs struggling to understand if economy is picking up or slowing down: Neelkanth Mishra 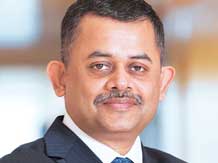 We continue to believe the market rally last year was mostly due to a global rally
in equities, helped by a reduction in the two important tail risks for India – the currency, and a stable central government. The Indian market’s price to earnings (P/E) premium to global equities P/E is currently at seven per cent. This is barely off 10-year lows if one excludes the financial crisis.

We believe few would argue that India cannot grow faster for longer than any large economy in the world, particularly given its low base. This should warrant a P/E premium. The risk, as seen in the past, has been that sometimes the gains in equities were eroded by either a sharp fall in the currency or high political instability. Both risks are now low, in our view.

Over the past year, we also saw India’s GDP growth bottom out, and ending of the phase of super-high inflation. For any asset class, the identification of a trough in prospects usually drives a re-rating. This further helped along the market. We continue to be constructive on the Indian market, as growth revives this year, and steady earnings growth continues.

Earnings downgrades have started yet again for FY15 and FY16. What are your estimates?

Earnings have now become far more important for investors and the market than earlier. For global investors, the new GDP series has compounded the problem of tracking economic momentum. There aren’t enough comprehensive and reliable high-frequency indicators that investors can rely on. That the Reserve Bank of India (RBI) and the finance ministry face the same problem is no solace — it actually increases investors’ concerns! In such an environment, we believe the only numbers investors can trust are earnings.

We expect FY16 index earnings growth to be 14-15 per cent. This implies cuts to current consensus numbers that suggest 19-20 per cent growth but at a reduced pace. The improvement in pace is what should matter to the market, in our view.

The medium-term outlook on India’s equity market still seems quite positive among investors, but one can sense a bit of confusion, and impatience with the long delay in a pick-up in corporate earnings. As we discussed earlier, global investors are also struggling to understand whether the economy is picking up steam or slowing.

The allocation of funds to different markets occurs at multiple levels and in many different ways. At the source of most savings (mainly pension funds, insurance funds, family offices and sovereign wealth funds), the allocations can be near-formulaic, i.e., allocate the year’s savings to markets on the basis of per ent of GDP. This type of capital flow does not change much from year to year, and takes a very long-term view on the economy. For intermediate levels, such as Asia funds or Emerging Market funds that are benchmarked to various indices, the decision does get influenced by the near-term/medium-term growth outlook. A third type of flow comes from absolute return funds, or hedge funds, which seek opportunities based on volatility and changes in momentum. Hedge-fund activity does seem to be influenced by changing prospects of economies.
Among the latter two types there are a number of momentum investors, who are now being attracted by the rebounds in China, Korea and now Taiwan.

What are the top concerns that might derail the sky-high expectations that investors have from the Indian market?

We see two India-specific factors that could derail the market further: if political rhetoric turns away from good economics, and if the banking system asset quality stresses somehow permeate into the rest of the economy. However, both these are low probability risks, in our view. A greater risk lies outside India. Several catalysts could drive a global risk-off, which could then affect Indian equities negatively.

The government has been making a host of announcements and is attempting to roll out reforms. How do you see this impacting corporate India?

The central government’s presence in the economy has shrunk dramatically since 1991. There are only five economic sectors of size that the Centre dominates — banking, railways, commercial mining of coal, defence production and nuclear energy. Each needs structural reforms that are difficult, and will take time. We continue to believe more exciting reforms need to happen at the state level.

That said, the government is doing much better than we expected. On banking, the refusal to recapitalize PSU banks shows a strong intent to reform. People question why government entities like Air India get allocations in the budget. But no one questions why PSU banks need to get Rs15-20,000 crore every year. If the banks were performing efficiently, they should have been able to raise capital from the market: for most of them, the government holding limit is not a constraint. This is the first government to be raising the issue of moral hazard of recapitalizing banks that misuse capital. Letting them lose market share improves the efficiency of capital allocation in the economy. We had not expected this to happen, and it has been a welcome surprise.
Similarly, we had not expected the government would be able to undo Coal India’s legal monopoly on commercial coal mining in India. In the Coal bill passed in March, it did exactly that, and the unions did not oppose it. When the government monopolies on telecoms and airlines were cancelled in the early 1990s, the markets may have ignored this initially, but these industries were completely transformed, with sharp increases in efficiency as government companies steadily lost share.
On Railways, the big changes may have to wait for the final report of the Debroy committee. We will then see the government’s resolve on structural changes. But, in the interim, there are encouraging changes afoot already – a much needed capacity build-up, as well as a focus on JVs with state governments to get them aligned with important projects, and also to decentralize control.
But, as one would expect, the impact on corporate India of these changes will only be visible several years later. In the near term, the key driver will still be the government’s fiscal spending. The central government was forced to aggressively curtail spending in the last several months of the fiscal year that recently ended, and that drove the sharp slowdown we saw. In the last few years, the June quarter has become much stronger than the March quarter, as the spillover of curtailed spending from March boosts the economy. We should start seeing that now. In the second half we also do not expect the government to be forced into a spending crunch like in the last few years, as this year’s fiscal numbers look credible.
This should bring back growth numbers for the listed entities.
What is your view on Make in India and is it expected to give a boost to the manufacturing sector?
Tired of explaining what it means to turn the fortunes of a sixth of humanity, I now carry around a map of India in which for every state I plot the name of the country that comes closest to it in population. So, UP is bigger than Brazil, Bihar has as many people as Mexico, Maharashtra is like Japan, Karnataka as big as France, Kerala is like Canada, etc. With that in the background, let’s start discussing what it takes to drive change. A Pena Nieto in Mexico is like Nitish Kumar in Bihar. An Abe in Japan is like Devendra Fadnavis in Maharashtra.
Changes on this scale cannot happen in a day or even a year, and cannot be encapsulated in a presentation. They must start with a bigger vision, a slogan, which then drives changes to people’s thoughts and actions. It takes many years to develop global manufacturing competitiveness in a sector. In the first few years, gains may only come in sectors we are strong in already, like IT Services, generic pharmaceuticals or auto components. But over time, as states compete to improve their own ease of doing business rankings, we should see India’s manufacturing competitiveness improve. In new sectors initially it may not appear in large factories employing thousands of people, even though those are the factories that get the media coverage. But momentum does seem to be building in terms of states projecting a more industry-friendly image. The West Bengal CM tweeting about the lack of strikes in WB during her tenure is a strong sign how political drivers are also changing.

Do you see growth picking up in India?

In our view, FY15, the year that just ended, was hurt badly by the strong fiscal consolidation. With this headwind gone in the new year, GDP growth should be better in this financial year than the last one.

So far, the RBI has cut interest rates by 50 basis points. How many more cuts do you expect and is this enough to revive corporate investments?

At Credit Suisse, we expect another 25 basis points cut. But I don’t think rate cuts are that important. First, think about transmission. With a large part of the banking system under-capitalised and some banks even struggling with liquidity stresses, even if the RBI were to cut rates it would not necessarily translate into lower costs of borrowing for corporates. This does not mean we should rush to recapitalise the broken banks, particularly as the reason for low loan growth right now is not lack of funds, but lack of loan demand.

There is a misconception that that if public sector banks are unable to grow then the economy cannot. This needs to be more nuanced: more than 40 per cent of outstanding loans are to sectors like metals, power generation and energy, where loan demand is justifiably weak (other than for ever-greening). That overall loan growth is still 11-12 per cent, meaning that the rest of the loan book is still growing at 20 per cent. So growth is not being constrained.

Also, look at the trend of disintermediation. The BoP (balance of payments) surplus has brought down bond yields much lower than the base rate, and the good quality corporates are moving to the bond market. So the bank credit growth number is also a bit misleading, in our view.

Given that some of the most profitable sectors are now seeing stress (IT &Pharma) what are the emerging sectors that will drive earnings in the future?
The “stress” in IT and Pharma is temporary, in our view. IT is now a large sector and growth cannot continue to be 25%, but the industry growth is still healthy. The structural drivers of that industry are still intact – a growing supply of English-speaking engineers, and steady end-demand growth, with increasing outsourcing. The cuts we have seen of late are related to currency movements. Once the downward reset is done, earnings momentum should normalize.
The Pharmaceuticals sector on the other hand is trickier – as the sector has become larger in the indices, it has seen more generalist interest, and the nuances of valuation are getting lost. For example, 4-5 years back an “exclusivity” related profit for a generic company was valued at 1x cash flows over the duration of the exclusivity. Now it is getting a 20x multiple. This may not end soon, but the sector may already be pricing in a few years of growth. That said, we believe India’s competitive strengths in the sector will be sustained.
[“source-business-standard.com”]