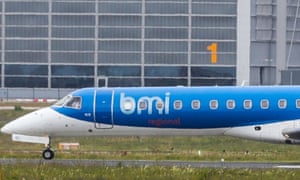 Flybmi is advising customers to seek refunds from credit and debit card companies or rebook with other airlines after the company collapsed late on Saturday, leading to the cancellation of thousands of journeys.

On Sunday night, it emerged that Flybmi’s Glasgow-based sister company Loganair, which flies to the Scottish Highlands and Islands as well as to a small number of destinations in England, Ireland and Scandinavia, was poised to step in and take over five of Flybmi’s routes from next month.

Loganair said it was in a “strong financial position” and would be flying from Aberdeen to Bristol, Oslo and Esbjerg, as well as from Newcastle to Brussels and to Stavanger in Norway. It was also “evaluating Flybmi’s wider network”.

Jonathan Hinkles, Loganair’s managing director, said: “It’s always really sad to see an airline go out of business, and our thoughts are with all those affected – particularly staff members. We are evaluating Flybmi’s wider network and assessing routes which align with Loganair’s distinct geographical area and overall strategic plans. We are also working on employment opportunities for pilots, cabin crew and engineering support staff to strengthen the Loganair team.”

Thousands of passengers have been left out-of-pocket after Flybmi, which operated more than 600 flights a week from regional airports including Bristol, Newcastle, Aberdeen and East Midlands, said it was calling in administrators.

Flybmi said its trading and future prospects had been “seriously affected by the uncertainty created by the Brexit process”. Spikes in fuel prices and a rise in carbon costs resulting from the EU’s recent decision to exclude UK airlines from full participation in the Emissions Trading Scheme had also contributed to its demise.

Tim Alderslade, chief executive of Airlines UK, the industry association that represents 13 UK carriers, said: “Today’s announcement demonstrates once again the ferociously competitive environment airlines currently operate in. It should give government – and other parts of the industry who relentlessly champion passenger growth but too frequently neglect the challenges carriers face – pause for thought.”

Regional carriers have been particularly vulnerable to increased costs because their small planes and less popular destinations mean costs per seat are already higher than bigger rivals.

Exeter-based Flybe put itself up for sale in November and has warned shareholders it will have to be wound up if they do not back a sale to a Virgin Atlantic-led consortium.

John Strickland at JLS Consulting said Brexit had piled on the pressure for UK operators partly because such airlines were less able to fund the cost of securing separate licences to operate in both the UK and Europe – rather than one for both.

He said Flybmi was also likely to have suffered as it had a large number of business travellers and struck special deals with business customers such as Airbus, for which it was shuttling staff between Toulouse and Bristol.

“Maybe some clients, with all the uncertainty around about Brexit will have been unwilling to extend or renew contracts,” Strickland said.

Flybmi, which employs 376 staff and has a fleet of 17 aircraft covering 25 European cities, told aircrew not to turn up for work. Affected passengers were told not to go to the airport unless they had rebooked flights with alternative providers. Flybmi said it was not able to buy or rearrange journeys for its customers.

Hundreds of passengers expressed dismay on social media at the sudden demise of an airline that was urging people to book flights via Twitter up until the day before its collapse.

Hannah Price, 23, was concerned she would not be able to recoup £550 spent on five flights to Brussels where she travels frequently on business.

Her flight was a shared ticket with Brussels Airline and that company has arranged for her to fly back to Bristol via Amsterdam on Monday, but her journey time will now be seven hours rather than two. “It’s good news that I am getting back to Bristol but it’s still frustrating,” she said.