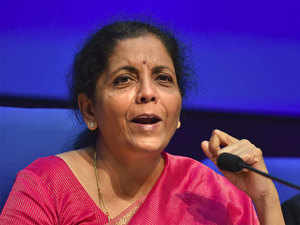 NEW DELHI: Finance minister Nirmala Sitharaman signalled that the government may extend the lower corporate tax rate of 25% to all companies, giving India Incsomething to cheer about. Her July 5 budget had lowered the rate for most companies but excluded the biggest.

“We brought it down in order that now 99.3% of all industries are covered by the 25% rate,” Sitharaman said in her reply to the discussion on the appropriation and finance bills in the Rajya Sabha. “Therefore, hardly any are left behind… We shall cover them sooner.” She said this was a commitment that had been given in the debut budget of the first Narendra Modi government in 2014 and it had to be honoured.

“The promise that corporate tax rate would be brought down has been kept,” she said.

The bills were endorsed by voice vote and returned on Tuesday, marking the passage of the first budget by the second Narendra Modi-helmed administration in Parliament.

Sitharaman said the government’s tax proposals are aimed at redistribution of wealth to bring about more equitable development. In her budget speech, she had proposed to cut corporate tax rate to 25% from 30% for companies with annual turnover of up to Rs 400 crore.

This government has come back to power with a larger mandate and is aiming to put in place a New India where there is greater transparency, less government, more governance and redistribution of resources with greater equity in mind, she said.

She said the government has undertaken steps to improve the condition of nonbanking finance companies to address the liquidity stress that has squeezed the sector. Sitharaman justified raising levies on petrol and diesel, saying that inflation was at rock bottom and the move would not add any significant burden in this respect.

On the levy of 2% tax deducted at source (TDS) if aggregate cash withdrawal exceeds Rs 1 crore, the finance minister said this will not be over and above the tax liability of the individual or the entity and can be set off when returns are filed.

The total TDS paid on cash withdrawal beyond Rs 1crore will be adjusted against the total tax dues of the taxpayer and would not be regarded as income in the hands of the taxpayer. This provision will come into effect from September 1. She highlighted the concessions offered to startups, electrical vehicles, affordable housing and financial service centres.

The finance minister also highlighted that the Modi government backed increase in devolution to states from 32% to 42%, which has provided a higher level of funds for them. In her reply to the debate in the Lok Sabha last week, Sitharaman had stuck to her budget proposals and declined to relent on demand by foreign portfolio investors (FPIs) structured as trusts that they be exempted from a higher surcharge.