Skip to content
ECONOMY
February 27, 2016 subhadip Beyond, for, G20, growth, look, Needs, policy:, say, to, ultra-easy, world
Shanghai Municipality Communist Party Secretary Han Zheng attends meeting with U.S. Secretary of the Treasury Jack Lew, in Shanghai, China, February 26, 2016.
REUTERS/CHINA DAILY ATTENTION EDITORS – THIS PICTURE WAS PROVIDED BY A THIRD PARTY. THIS PICTURE IS DISTRIBUTED EXACTLY AS RECEIVED BY REUTERS, AS A SERVICE TO CLIENTS. CHINA OUT. NO COMMERCIAL OR EDITORIAL SALES IN CHINA. 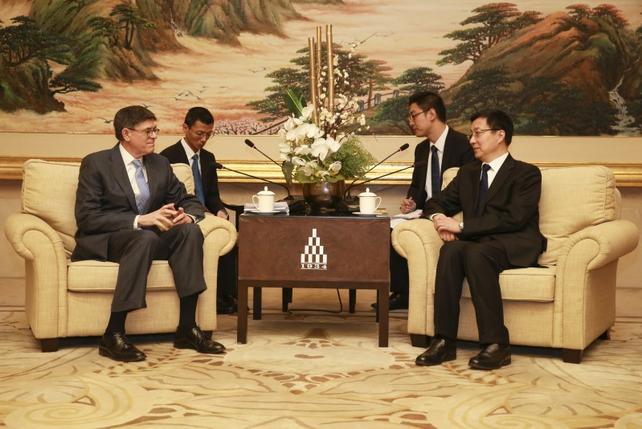 The world’s top economies are set to declare on Saturday that they need to look beyond ultra-low interest rates and printing money if the global economy is to shake off its torpor, and renew focus on structural reform to spark activity.

A draft of the communique to be issued by the Group of 20 (G20) finance ministers and central bankers at the end of a two-day meeting in Shanghai reflected myriad concerns and policy frictions that have been exacerbated by faltering economic growth and market turbulence in recent months.

“The global recovery continues, but it remains uneven and falls short of our ambition for strong, sustainable and balanced growth,” the leaders said in a draft seen by Reuters.

Geopolitics figured prominently, with the draft noting risks and vulnerabilities had risen against a backdrop that includes the shock of a potential British exit from the European Union and the crisis over rising numbers of refugees and migrants.

A senior official who had seen various versions of the text said the potential “Brexit” – to be decided by a referendum on June 23 – had not been mentioned in earlier drafts, but had been added after a strong case for was made for its inclusion by British officials.

“The risk of Britain leaving the European Union wasn’t in the draft on Thursday,” he said.

There was no sign of any plan for specific coordinated stimulus spending to spark activity, as some investors had been hoping after markets nosedived at the start of 2016.

The G20 policymakers “judge that the magnitude of recent market volatility has not reflected the underlying fundamentals of the global economy”, the communique draft said.

Divisions have emerged among major economies over the reliance on debt to drive growth and the use of negative interest rates by some central banks, such as in Japan.

Germany had made it clear it was not keen on new stimulus, with Finance Minister Wolfgang Schaeuble saying on Friday the debt-financed growth model had reached its limits.

“It is even causing new problems, raising debt, causing bubbles and excessive risk taking, zombifying the economy,” he said.

The G20, which spans major industrialized economies such as the United States and Japan to the emerging giants of China and Brazil and smaller economies such as Indonesia and Turkey, reiterated in the communique a commitment to refrain from targeting exchange rates for competitive purposes, including through devaluations.

They pledged to “consult closely” on exchange markets.

Japanese Finance Minister Taro Aso told reporters on Friday Bank of Japan governor Haruhiko Kuroda had said during the meeting Japan’s that move to adopt negative interest rates were “aimed primarily at achieving a 2 percent inflation target but are not targeting currencies”.

G20 host China used the meeting of the world’s top financial officials to try to dispel concerns about the world’s second biggest economy, and Beijing’s ability to manage it, that have grown since a market rout and a surprise devaluation last summer.

Chinese policymakers reiterated pledges not to devalue the yuan CNY=CFXS again, and Premier Li Keqiang told the G20 opening session on Friday there was no basis for continued depreciation of the yuan.

But there appeared to be concerns that some members may seek a quick fix to domestic woes through a weaker currency.

Japan’s Aso said he had urged China to carry out currency reform and map out a mid-term structural reform plan with a time frame.

“Chinese authorities need to present a mid-term structural reform plan with concrete schedule and a package of measures to stabilize yuan, based on recognition that communication between Chinese authorities and markets has caused market volatility and capital outflow,” he told reporters.

U.S. Treasury Secretary Jack Lew also encouraged China on Friday to shift to a more market-oriented exchange rate in “an orderly way” and “refrain from policies that would be destabilizing and create an unfair advantage”.