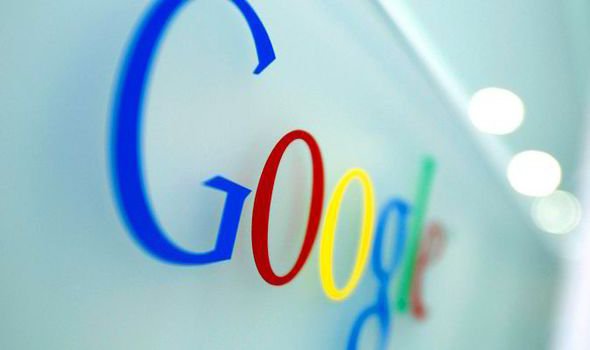 Google has confirmed that their long-touted mobile-friendly algorithm is now rolled out. However, many mobile-friendly pages have yet to see changes in score since re-indexing takes a while.

A report from Google indicates that the mobile friendly algorithm update is fully rolled out, and is now in place in every data center. According to a response offered on Twitter to a question raised by Search Engine Land’s Barry Schwartz, Gary Illyes confirmed that the Google mobile update was in place.

The launch took place on April 21st, but more than ten days after the roll-out, webmasters had yet to see any noteworthy changes to the rankings of their mobile results. This, however, does not negate the news of the roll-out, as Google’s Gary Illyes further mentioned that re-indexing would take time. Not all pages had been indexed at the time of his statement, and it would take more time before such pages could notice significant changes to their scores and rankings.

While a number of webmasters and tracking companies have yet to see significant changes to their Google mobile search results, a few have begun to notice small changes within mobile search engine results pages (SERPs). We can expect to witness more changes over the next few weeks.

Once re-indexing is complete, the full impact of the roll-out can now be assessed. Many site owners and webmasters were on-edge pending the release, popularly labeled Mobilegeddon. The update is intended to improve mobile user experience and quality of results offered, in order to meet the needs of an ever-growing mobile search audience.

Site owners and webmasters therefore have no choice but to ensure their sites are as mobile-friendly as possible. This includes implementing mobile friendly interfaces, including tags for mobile-friendliness within results pages and using different techniques to improve page and site-loading speeds for the user as part of their internet marketing strategy.

Prior to the April 21st launch, there was much speculation regarding the impact of the release on website scores and ranking for mobile search. Most industry experts expected massive fluctuations within SERPs as well as de-indexing of non-mobile-friendly sites. However, this is yet to be noticed; at least not to the degrees anticipated.

Only after full re-indexing would webmasters be able to make helpful conclusions about their current status, as well as make further effort to improve rankings on mobile. In addition, Gary Illyes mentioned that given the extensive implementation of responsive web design and other mobile-friendly design techniques, the impact of the update may not be as dire as earlier expected.

Google has assured web developers and webmasters that the algorithm will be responsive to improvements made regarding mobile friendliness hence they don’t need to fret about de-indexing. Once the shortfalls are rectified, such sites should notice improvements in their ranking within a short time.

However, those who implemented mobile-friendly adjustments before the deadline are still at greater advantage since they will be properly ranked and can proceed with further improvements to improve or maintain their positions on mobile organic search.

In the meantime, there’s little else to do but to wait and see what the next couple of weeks will bring.