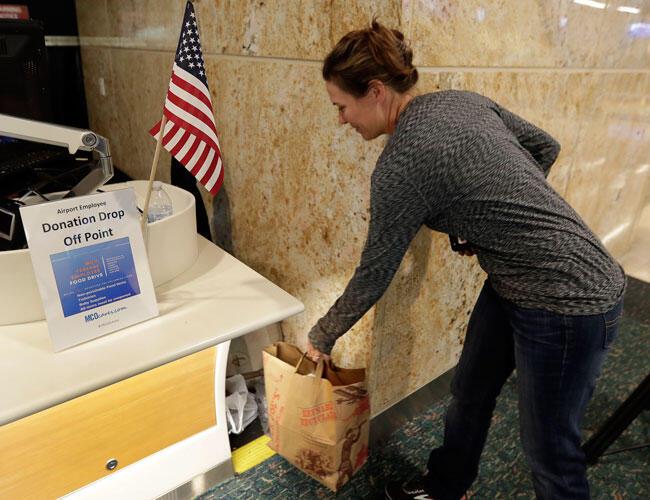 Emily Hunt, a flight attendant for Southwest Airlines, drops off a donation of food for TSA workers at Orlando International Airport on Jan. 15. Florida airports are helping federal workers who aren’t getting paid during the government shutdown by offering free food, holding a food drive and opening a food bank. (AP Photo / John Raoux)

The U.S. economy is taking a larger-than-expected hit from the partial government shutdown, White House estimates have shown, as contractors and even the Coast Guard go without pay and talks to end the impasse seemed stalled.

The longest such shutdown in U.S. history dragged into its 25th day with neither President Donald Trump nor Democratic congressional leaders showing signs of bending on the topic that triggered it – funding for a wall Trump promised to build along the border with Mexico.

Trump insists Congress shell out $5.7 billion for wall funding this year, as about 800,000 federal workers go unpaid during the partial shutdown. He has refused to support legislation providing money for a range of agencies to operate until he gets the wall funds.

The Trump administration had initially estimated the shutdown would cost the economy 0.1 percentage point in growth every two weeks that employees were without pay.

But there was an updated figure: 0.13 percentage point every week because of the impact of work left undone by 380,000 furloughed employees as well as work left aside by federal contractors, a White House official said on Jan. 15.

The shutdown’s effects have begun to reverberate across the country.

Longer lines have formed at some airports as more security screeners fail to show up for work.

Food and drug inspections have been curtailed but about 400 U.S. Food and Drug Administration staffers returned to work, Commissioner Scott Gottlieb said.

They focus on high-risk medical devices, drugs and food.

With the shutdown dragging on, federal courts will run out of operating funds on Jan. 25 and face “serious disruptions” if the shutdown continues, according to a court statement.

To try to take some of the sting out of the shutdown, Trump planned to sign on Jan. 16 the “Government Employee Fair Treatment Act of 2019,” which is legislation that would ensure that those federal workers furloughed will receive backpay once the shutdown is over.

The Internal Revenue Service said it planned to bring more than 46,000 furloughed workers back to their jobs as the agency enters its peak season of processing tax returns and refunds.