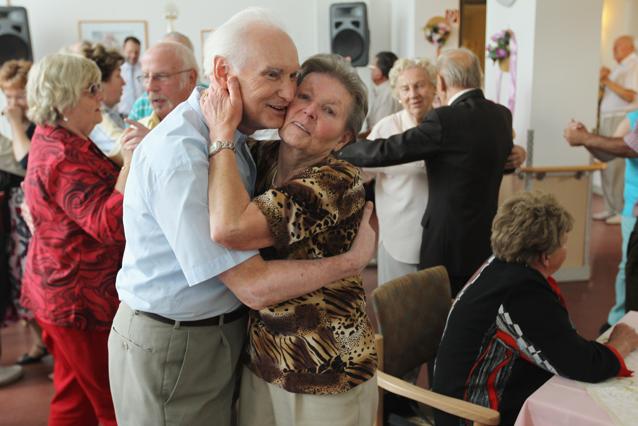 After I finished discussing my investment recommendations for the quarter, John asked Mary, “So what do you think, Hunny?”

“I don’t know,” she replied, “You know I don’t like this stuff and just want you take care of it.”

Now mind you, I’ve heard this conversation a million times and usually the husband gives his wife a concerning look after a response like that and says something to the tune of, “I know, but if I’m not here I want you to know what to do,” and it usually ends there and the meeting progresses as normal.

John barked back in a harsh tone, “Damn-it Mary, this is important, you’ve got to stop saying that and starting figuring this stuff out.”

Mary glanced back and John, clearly implying that this was not the time or place to have a discussion like this… but that didn’t deter John, he was on a mission to make sure his wife got it.
Couples and retirement (Photo by Sean Gallup/Getty Images)

Issues like making sure your wife will be okay in case you’re no longer around can come up at different times and for different reasons. Whether it’s a health scare, just not feeling like yourself, or seeing something bad happen to someone like you, men tend to be fixers and want a plan or solution in place right away. They don’t want to dwell on it or add it to their existing list of worries and concerns – since it’s already reached a point of frustration. Unfortunately as a result, it’s not uncommon for men to hide their real feelings of fear and worry behind an angry tone or outburst.

So in situations like John and Mary’s, the words don’t always come out the way they wanted to or hoped, but getting it resolved seems more important than the delivery. It’s also important to note that plenty of women are perfectly comfortable and capable of managing money, but for this article I am focusing exclusively on traditional couples in which the husband has always managed the investments.

So what’s a husband to do in order to get his wife to start developing a better investment sense so that years of hard work and savings aren’t just thrown into an inappropriate investment or stolen out from underneath her by bad advice, high fees, and excessive commissions?
To start, husbands have to be willing to undo some of the things they know about investing. You know the old adage that you can’t understand another person’s perspective until you walk a mile in their shoes? Well gents to get this right, we’re going to have to slip on a pair of heels.

Here’s the reality, men and women don’t invest the same way and trying to get more her more interested, and at the same time, to agree with your style and approach is like training you to watch and care for the grand kids the same way she does. It’s not happening without a lot of kicking and screaming from both you and the grand kids right? But there is a way to bridge the gap.

Getting back to the meeting, I broke the heavy silence and deadly glares between John and Mary by asking if it be okay if I shared a few ways I work with couples with similar concerns.

Before they even answered, I asked Mary, “If something were to happen to John, what would be your biggest priority?” She raised her fingers to her mouth, suggesting she didn’t really know what to say (This is a good sign, as you don’t want your spouse biting-at-the-bit for you to be a goner).

So I continued, “What would you want to make sure you didn’t have to worry about.”

“The bills,” she exclaimed.

Now I would have wagered a million bucks that this would be her answer since women stereotypically tend to be more focused on the present situation whereas men look to the future. Most guys want to grow their nest egg and make sure plans are in place for the long-term. Women, on the other hand, want to make sure the stuff they do every day is taken care of and there is even a little extra in case of an emergency, but more so, an opportunity to help the kids, grand kids, or someone else in need.
That’s critically important point for guys to not only figure out, but to use as a means to start to get their wife more involved in the investment process.

In this situation, I felt it was okay to add a little humor to break the ice further by saying, “Let’s talk about how much money you would need to feel like you wouldn’t have to worry about the bills for a while or at least until you were done grieving for John and could replace him with a younger, richer version.”

Both chuckled, and what resulted was a plan to increase the amount of money allocated to cash. Instead of the more traditional 3%, the numbers worked out to be closer to 10% for her to sleep better at night.

On the surface, that may sound crazy to a guy since you can’t earn squat on cash these days, but like anything else, if you want your wife involved, you have to sacrifice some input and control. And the best place to do this is with an asset class that’s easy to manage and understand.

In the next segment, I’ll discuss the “Aha moment” I had about couples and investing, along with two additional strategies you can use to significantly impact your marriage, and the way you manage your assets together.