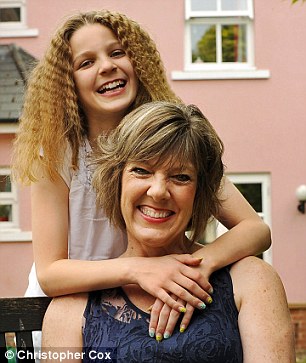 Long-established mortgage borrowers are being offered the chance to end their loans paying a fraction of the interest rate they signed up to at the start.

Experts say borrowers with between five and ten years to go on a standard 25-year mortgage term could easily have been paying around eight per cent interest when they bought their homes.

Today homeowners can exploit a triple bonus to cut their final payments to less than a quarter of this figure. Here we explain why long-term borrowers are smiling – and where to find the best loan deals this summer.

SMILE ONE: If you purchased your home more than a decade ago then you should have seen your mortgage balance fall while your property value has risen. This means your vital ‘loan-to-value’ figure will be low, so you should qualify for the best rates in the market.

I HAD NO IDEA RATES WOULD GET THIS LOW

With just seven years left to go on her mortgage mother of three Stephanie Ford is well aware that today’s borrowers are living in a golden age.

‘I remember when mortgage rates of six to eight per cent were considered good value and, like everyone else, we struggled when rates went even higher in the 1990s,’ she says.

Having scrimped and saved to pay her 25-year loan in those bad times she is amazed at how low rates have fallen. ‘Our most recent five-year fix was set much lower than the one we had before – and it looks as if the next one will be cheaper still,’ she says.

Biology teacher Stephanie, 50, who lives in a four-bedroom detached house near Sudbury, Suffolk, is looking at a range of five-year fixes set at less than 3 per cent. ‘I’d never expected rates to get this low and being able to lock into one now will let us build up some useful savings.

‘If we can put enough aside each month, we may be able to clear the loan in full in five years’ time rather than waiting until its original end date two years later.’

You can get your loan-to-value by dividing the outstanding balance on your mortgage by your property’s value and multiplying the result by 100. So if you still owe £45,000 on a home now worth £110,000, your loan-to-value is just over 40 per cent. Lenders offer their lowest mortgage rates to people with loan-to-values of 60 per cent or less.

SMILE TWO: Borrowers with perfect payment histories over many years are particularly sought after by lenders. So too are people whose monthly mortgage bills account for only a small proportion of their monthly income.

If your pay has gone up over the years and your monthly payments have become easy to manage then you are likely to sail through the controversial new ‘affordability tests’ introduced last year as part of the Mortgage Market Review – tests that are being blamed for excluding many younger people from the mortgage market.

SMILE THREE: Anyone who switches to a best-buy mortgage now is signing up when rates are at historic lows.

Six months ago, most experts thought rates were on the floor and could only rise. Since then they have fallen further and it is now possible to get a mortgage that charges less in interest than your money can earn in a best-buy current account from the likes of Nationwide Building Society, Santander or TSB.

Better still, fee-free mortgage deals abound at the moment, so you can sign up to a new deal without paying any application or set-up costs. Several lenders will also pay your legal and valuation costs if you switch to them as part of the remortgage.

WHERE TO GO FOR BEST DEALS

To help long-established borrowers find today’s best deals, we asked a panel of independent experts to provide details of the lowest rates – focusing on the fee-free offers they normally recommend to people with mortgages of £100,000 or less.

If you want a fee-free, five-year fix to see you through to the summer of 2020 then the best buys include loans from Nationwide at 2.44 per cent, TSB from 2.49 per cent, the Post Office from 2.68 per cent and Woolwich from 2.75 per cent.