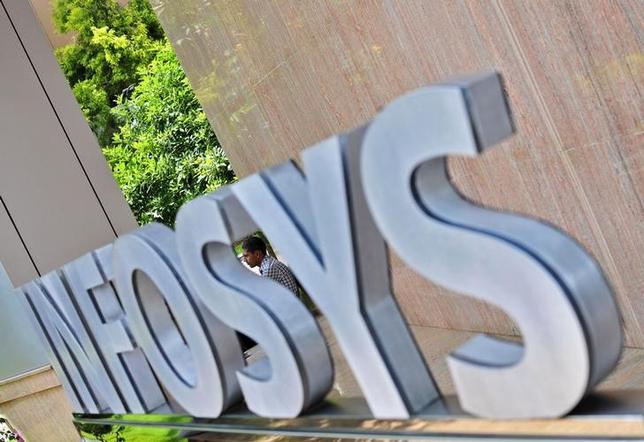 An employee is seen behind an Infosys logo at the company’s campus in Bangalore September 23, 2014.
REUTERS/ABHISHEK CHINNAPPA/FILES

Infosys Ltd(INFY.NS), India’s second-largest software services exporter, raised its annual revenue growth forecast on Thursday due to stronger demand for high-margin automation and other services, sending its shares up as much as 5 percent.

Under Chief Executive Vishal Sikka, brought in about one-and-a-half years ago to chart a new strategy, Infosys has been focusing on winning more lucrative digital technology and automation outsourcing contracts.

Infosys, which counts Apple (AAPL.O), Volkswagen (VOWG_p.DE) and Wal-mart Stores (WMT.N) among its clients, raised its sales growth view for the year through March 31, 2016 to a band of 12.8 percent to 13.2 percent from the 10-12 percent it guided in October.

Shares in Infosys were trading up 4.7 percent by 0510 GMT, after having risen as much as 5.3 percent earlier, while the broader Mumbai market index .NSEI was down 1.1 percent.

The company also reported a bigger-than-expected 6.6 percent increase in quarterly net profit as it added 75 new clients during the quarter and renewed some existing “large-scale” contracts, Infosys said in a statement.

Analysts on average had expected a net profit of 33.53 billion rupees, according to data compiled by Thomson Reuters.