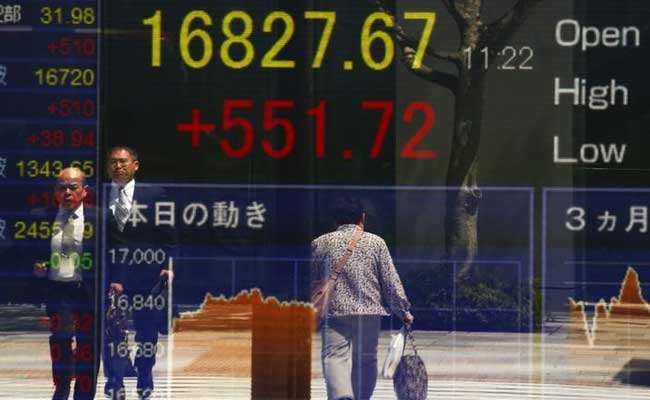 Singapore: Asia bond demand is running at its highest level in eight months and looks set to stay firm this year, boosted by the region’s higher returns at a time when stubbornly low inflation in the United States is keeping a lid on Treasury yields.

Investors poured $9 billion into Asian government and corporate bonds in May, topping $8.8 billion in April, ANZ Research shows. Both were the highest levels since September 2016.

Daniel Morris, senior investment strategist at BNP Paribas Asset Management in London, said initial hopes U.S. President Donald Trump would lift inflation and growth through fiscal stimulus have been dashed. That has pulled both the dollar and U.S. debt yields back.
“So Asian fixed-income starts to look a lot more attractive,” he said.

After hitting a two-year high of 2.641 percent in December, U.S. 10-year Treasury yields have fallen back. They dropped to 2.103 percent last week, their lowest level since Trump’s election win, after the United States reported that May core inflation, which excludes food and energy, was the lowest in two years.

Even the U.S. Federal Reserve’s interest rate increase and hawkish tone, which came on the same day as the data, failed to substantially lift Treasury yields.

While U.S. five-year yields, which are highly sensitive to rate policy, rose to a four-week high of 1.8 percent last week, they are well below this year’s peak of 2.148 percent hit in March.

“The big picture remains one in which investors have more faith in the longevity of the current regime of exceptionally easy monetary conditions than they have in the sustainability of the cyclical upswing in corporate earnings,” said Paul O’Connor, co-head of multi-asset strategy at Janus Henderson Investors in London.

Most funds in April and May poured into India, where returns on 10-year government bonds are around 6.5 percent, Malaysia, at 3.9 percent and South Korea, where yields are around 2.13 percent, the data shows.

“The fact that there has been a reduction in tail risk in terms of European political risk, the fact that there are less inflation expectations in the U.S. and therefore expectations for monetary policy could be more dovish, is generally supportive of Asian fixed income,” said Omar Slim, Asian fixed income portfolio manager at PineBridge Investments in Singapore. “Asia also continues to have relatively good credit metrics.”

The bond market strength might prompt a pullback in demand in the near term, analysts said, but the longer-term outlook is positive, especially as low U.S. inflation is undercutting the conviction for higher Fed interest rates.

The risk is if the Fed does follow through on its hawkish messaging even as inflation is subdued. Last week, after their second rate rise this year, Fed officials suggested they are more concerned about keeping rates too low for too long than they are about raising them too fast or too high.

The investment in Asia bonds is partly a bet on the region’s relatively strong economic growth – the International Monetary Fund forecasts Asia-Pacific GDP will rise 5.5 percent in 2017 and 5.4 percent in 2018.

There are also strong inflows into Asia across asset classes, so bond demand is not about risk aversion, said Khoon Goh, head of Asia research at ANZ.

Inflows into Asian equities have been positive this year, and the MSCI Asia ex-Japan index is up 22 percent.

“If you see very strong inflows in debt and less so in equities, then it’s fair to make the statement that it’s risk aversion. But the fact that you’re seeing strong inflows into both means this is not the case,” Goh said.