Skip to content
INDUSTRY
June 20, 2015 Joy Mitra always understood the importance of family, next chapter of my life is going to be with my family, very challenging" to balance family needs

Industry Minister James Moore is leaving federal politics in order to spend time with his young family, although he isn’t ruling out a possible return.

Moore, who announced Friday afternoon that he will not be running in the upcoming federal election, said it was recent “difficult news” about the health of his two-year-old son Spencer that made him refocus his priorities.

Spencer suffers from a rare bone disease and “it’s very challenging” to balance family needs and responsibilities as an MP, Moore said during an interview with CBC News.

“There are a lot of people who can serve as the member of Parliament for my riding. There are people who can be and do a fine job as industry minister, but only one person can be Spencer’s dad and that’s me. I need to go home now,” he said to the CBC’s Chris Hall.

Moore, who will stay the remainder of his term as MP and cabinet minister until the election on Oct. 19, said he told Prime Minister Stephen Harper about his decision a few weeks ago. The timing “makes sense,” he added, considering it’s the beginning of summer and the political season.

“Of course, you remember that the prime minister was an MP first elected in ’93 and he left because he had a young family who was on the other side of the country as well. So there’s certainly some sympathy and empathy about the need for all of us to put our kids first.”

And similar to Harper, that means the door is still open for Moore to re-enter federal politics.

“Who knows what the future holds? But I know that the next chapter of my life is going to be with my family.”

Government House leader Peter Van Loan told reporters in the foyer of the House of Commons that Moore has had “an impressive political career of accomplishment.”

“I want to thank him for his service and contribution and I think all Canadians thank him,” he said.

In a statement, the Prime Minister’s Office thanked Moore for his 15 years of public service.

“We fully understand his need to spend more time with his family and wish the minister, his wife Courtney and his son Spencer well.”

The B.C. MP is just the latest high-ranking cabinet minister to make an exit from federal politics, leaving Harper with a thinning army with which to capture Canadian votes over the next few months.

Liberal MP Irwin Cotler said Moore has been “an excellent minister,” but noted that his departure will be “harmful” to the Conservative Party, especially in light of MacKay and Baird’s exits.

“These are not only senior ministers but they played important roles in political campaigns, they’re respected people. So I think this will have negative fallout for the Conservative Party,” Cotler said to reporters.

Conservative MPs dismissed the notion that the recent departures could affect the party’s election campaign.

Van Loan said this “is a normal turnover” and the Conservatives have “tremendous bench strength.”

Looking at the party’s prospects past the election, Manitoba MP James Bezan added, “You never know who’s going to be sitting, coming up as new talent.”

“We’ve got a lot of qualified people who can fill the shoes of ministers who have retired and I think we’ve got a great team and going forward, we’ll have a fantastic team as well,” he said.

However, one political scientist said Moore’s departure is a blow to B.C.’s point of view being represented in the cabinet.

“To have someone who looks out for the regional issues … that’s a loss for British Columbia for sure,” said David Moscrop, a political science PhD candidate at UBC.

Moore, 39, was first elected to the House of Commons in 2000 to represent Port Moody-Coquitlam-Port Coquitlam for the Canadian Alliance Party. The party later merged with the Progressive Conservatives to become the Conservative Party of Canada.

He has held a number of cabinet positions since the Conservatives assumed power in 2006, from a junior role as secretary of state, then heritage followed by his current industry portfolio. 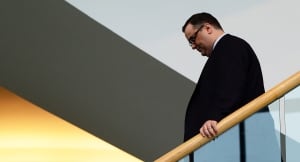 James Moore was heritage minister from 2008 to 2013 before taking over the industry portfolio. (Sean Kilpatrick/Canadian Press)

As industry minister, Moore has presided over Canada’s space program. The federal government recently promised to renew funding to the International Space Station, ensuring thattwo more Canadian astronauts will get a chance to head into space.

He also oversaw changes to Canada’s telecommunications sector, including wireless spectrum auctions that attempted to encourage greater competition among carriers.

It was during his tenure as heritage minister that Canada’s Museum of Civilization was remade into the Museum of History, which prompted criticism from opposition parties and a former museum CEO.