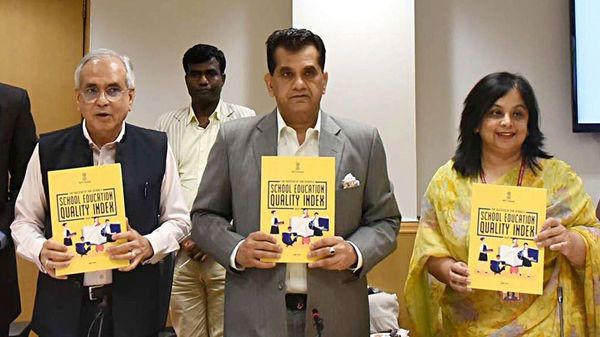 Performance was judged on the basis of several parameters, such as education outcome, governance, enrolment rate, language and mathematics skills, transition rate, and drop-out rate, among others.

NITI Aayog considered 2016-17 as the reference year for the index. West Bengal did not participate in the survey.

“The measurement of quality-related education outcomes is imperative for incentivizing states and Union territories to improve the performance of their school systems,” the report observes. The inclusive development hinges upon ensuring quality education and improving education outcome will augur well for India’s economy, Kant added.

NITI Aayog said the study had divided states into three categories—large states, small states and Union territories—for the ease of mapping and reducing uneven comparison among regions and states.

“Among the 20 large states, 18 improved their overall performance score between 2015-16 and 2016-17. The average improvement in these 18 states was 8.6 percentage points, although there was a lot of variation around that average in terms of the fastest and slowest improving states. Due to this variation, many states that improved their overall performance score still show a decline in rank,” the school index report said.

Only Karnataka and Uttarakhand performed poorly in both their overall performance score and rank between 2015-16 and 2016-17, it added.

Among the eight small states, five improved their overall score, with Meghalaya, Nagaland and Goa standing out by improving by 14.1, 13.5 and 8.2 percentage points, respectively.

All seven Union territories which took part in the survey showed an improvement in their overall performance score between 2015-16 and 2016-17.

Among all categories, Odisha, Haryana and Assam witnessed the maximum growth in their rankings.

“Inclusive development hinges upon ensuring quality education. Proper schooling prepares individuals for social and civic responsibility, builds social capital and encourages effective cognitive development,” Amitabh Kant said. The index was developed in collaborations with the human resource development ministry, state governments, the World Bank and sectoral experts. India’s education sector is one of the largest in the world with around 300 million children pursuing education in the country of which a lion’s share or over 250 million are in schools. India is home to 1.4 million schools and around 51,000 colleges and universities.