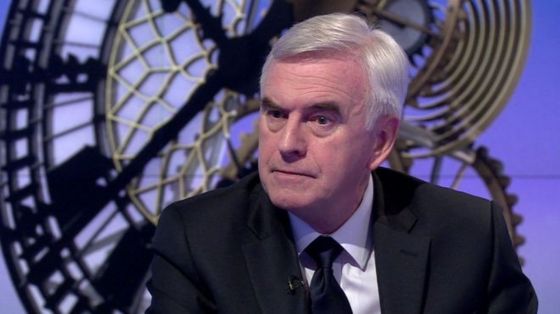 Labour is to announce a new “fiscal credibility rule” which will oblige any future Labour government to balance “day-to-day” spending with the amount it raises in taxes.

Shadow chancellor John McDonnell told the BBC that over a five-year Parliament borrowing would only be allowed for investment.

Labour sources said it was aimed at regaining “economic credibility”.

But the government said it was clear Labour had not learned its lesson.

Mr McDonnell said the deficit on “current spending” would be eliminated. Labour insisted that the new rule was not a commitment to spend more money than the present government.

Chancellor George Osborne has put in place rules saying that the government will create an overall budget surplus “in normal times”.

Labour voted against the rule in Parliament, and Mr McDonnell said any future Labour government wanted to invest more than the Conservatives.

Which could mean more borrowing.

The Office for Budget Responsibility – the government’s economic watchdog – will be given new powers to “whistle blow” when it believes that the “credibility rule” has been breached.

And under the Labour plans it will also report to Parliament rather than the Treasury.

“We know now from the world’s central banks that the world economy is looking at stagnation, and there needs to be a new rule,” Mr McDonnell told me.

“And we want people to have confidence in a Labour government. That means we are introducing a new fiscal credibility rule.

“First, that a Labour government will always balance day to day expenditure.

“Second, that we will only borrow for the long term, and that means for investment – investment in our infrastructure, in the homes that we need, the railways, the roads, the renewable energy.

“And in new technology to grow our economy.

“Third, debt will fall under a Labour government over a five year period.

“And then finally all this will be supervised independently by the Office [for] Budget Responsibility, reporting directly to Parliament.

“This is a new iron discipline for a Labour government,” he said.

Labour Party sources have admitted to me that “economic credibility” is one of the key reasons why people did not support the party at the last election.

I am told that internal polling reveals concerns that Mr McDonnell says he wants to tackle.

The Chancellor has made it clear that he believes that a Labour government would put the public finances at risk.

Mr McDonnell says that it is only by allowing more borrowing for capital investment that the British economy can grow to its full potential.

I have just received some extracts from a speech John McDonnell is making on Friday, laying out this new rule.

“When governments do not manage their finances responsibly, it is ordinary working people who eventually suffer.

“When governments try to disguise their spending, it is accountability and democracy that suffer.

“The Fiscal Credibility Rule is not about making spending commitments. It is about providing a framework for the responsible management of public finances.

“We must be a party that thinks first about how we earn money, not only how we spend money.”

This is clearly a significant attempt to re-position Labour as one of economic responsibility. It will be for the public to decide if they are convinced.

The government has responded to Mr McDonnell’s new fiscal rule.

Chief Secretary to the Treasury Greg Hands said: “Labour spent and borrowed too much last time they were in power.

“It’s clear they’ve not learned their lesson and can’t be trusted with the economy.

“At a time of uncertainty in the global economy, Labour is a serious threat to our economic security and it’s working people who would pay the price,” Mr Hands said.