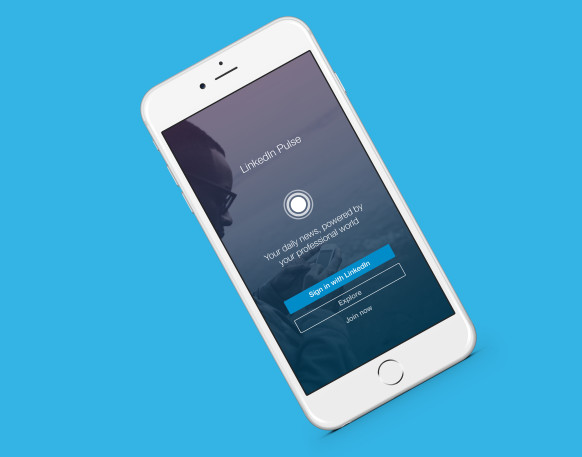 AT SOME POINT soon after you wake up, you probably check the news.

You may open Facebook to scroll through updates from your friends. You may check Twitter to see late-night clips or early morning gaffes from presidential candidates. Or you may check a newsreader like Feedly or Flipboard to see sports updates or gadget reviews from your favorite sites.

But if you want to know what’s happening in your industry or among your colleagues, there hasn’t been a dominant one-stop app. Akshay Kothari wants Pulse, LinkedIn’s standalone mobile newsreader that’s just been fully redesigned, to be that place.

LinkedIn, the social networking site for professionals, may not be the first company you’d think to go to for news. But in 2013, it acquired Pulse, a news app created in 2010 by Kothari and his co-founder, Ankit Gupta, as a class project at Stanford. “We thought it was really hard to read news on the phone,” Kothari tells WIRED of the dark ages of mobile a half-decade ago. And so they set out to fix it.

Five years later, that’s no longer true. Newsreaders are everywhere. Apple has even announced plans for its own news app, Apple News, which will compete with Facebook, Twitter, and a myriad of mobile news apps already on the market. LinkedIn is joining the herd as it seeks to cement its reputation as a go-to company for content, not just résumés.

But to compete with these other products, Kothari knows that Pulse must offer something different. It’s the “world’s first personalized business news digest,” he says. More importantly, perhaps, LinkedIn’s Pulse is bringing back human editors, not just algorithms, to tailor the news you see to what it already knows about you. And yet it may not be alone—Apple is reportedly planning to curate news with the help of humans, too.

As a LinkedIn user, the company knows you well. It knows who you are, where you work, and what you do. But it also knows who you know, what industry you’re a part of, and, in some cases, what you care about. Pulse leverages all of this data with the intention of delivering a news digest that’s tailored to your professional interests and needs.

In the app’s feed, Pulse users will see news and analysis from both established publishers as well as LinkedIn users posting their thoughts on the site. Human editors curate headlines of the day, breaking industry news, and select interesting stories for users in specific industries or with certain jobs. The app’s algorithm, meanwhile, will cull updates based on your company affiliations, publishers you follow, your connections, and in-app feedback. Readers may also be alerted to news that features people in their network thanks to another LinkedIn acquisition, Newsle.

Above each story in Pulse, users will see the reason that story is being shown to them.

But unlike on Facebook, where you may be shown posts and wonder why, Kothari has prioritized transparency within the app. “We’ve realized that context is really important,” he explains. “People don’t really trust why you make decisions for them. We want to give you the best content, context for each content, and more control.”

Kothari means this literally. Working on the app, the team realized that while people do want to be shown top stories instead of sifting through an RSS feed, they also want to understand why they’re being shown certain posts. So above each story in Pulse, users will see the reason that a story is being shown to them. For Kothari, he says, these reasons range from “Editor’s pick” to “Trending in Internet industry” to “Popular among employees of LinkedIn.” Users will also have more direct control over the kinds of stories they see by indicating what they do or don’t want out of their updates and personalized notifications.

‘Unlikely to Be Identified By Algorithms’

Despite its emphasis on clarity and control for users, LinkedIn’s moves in the past few years look a whole lot like what Facebook already does. As with the hugely popular social site, LinkedIn has made it clear that it wants to be in the app business. It has several standalone apps, like Pulse, with which it’s hoping to draw more users to its ecosystem. The company has also made it clear it wants to be in the content business—one that Facebook already dominates. LinkedIn encourages users to write and post directly on the site, which will be shared to relevant Pulse app users. And, like Facebook, Pulse uses its own algorithm to help determine what you see.

But the key difference between Facebook and Pulse’s feeds is pretty crucial—it comes down, ultimately, to those human editors that choose the perfect news stories and LinkedIn posts for you. The company believes curators—real, live human editors—make a difference. “They add the human voice to the app,” Kothari says. And while algorithms will determine how far and wide to send certain stories based on their initial popularity, it’s humans that are choosing what they think will resonate best.

Pulse will, however, have some competition on that front—humans are making a comeback. Snapchat has human curators select the snaps that end up in its shared stories and the clips in its news platform Discover. Apple is reportedly looking at human editorsfor its own News app, too—it posted a job listing on Friday for editors, admitting that the company needs humans “to recognize original, compelling stories unlikely to be identified by algorithms.” And venture capitalist Chris Sacca has suggested that Twitter should hire human editors to curate feeds during live events, “culling them for relevancy, importance, humor, and value.” All of which shows that while algorithms have worked well for, say, Facebook, they may not work—or be enough—for everyone. Pulse has found that sometimes you need that something extra that comes only with a human touch.