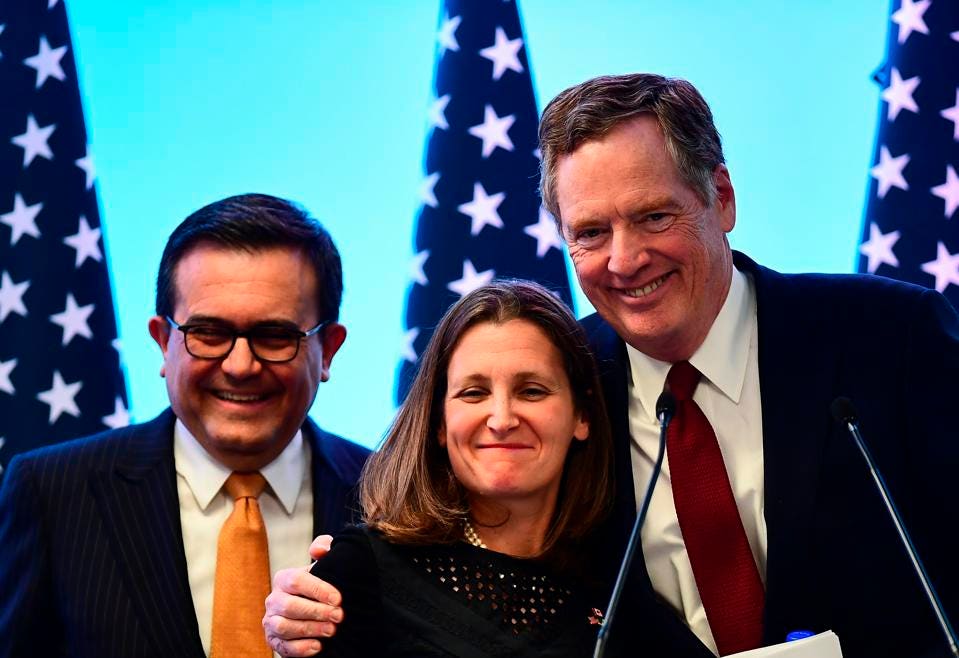 (L-R) Mexican Economy Minister Idelfonso Guajardo, Canadian Minister of Foreign Affairs, Chrystia Freeland and US Trade Representative Robert Lighthizer pose for pictures before giving a message to the media during the seventh round of NAFTA (North American Free Trade Agreement) talks in Mexico City, on March 5, 2018. US President Donald Trump said he would not back down on the tariffs, nor offer exclusions to NAFTA partners Canada and Mexico unless he gets a ‘fair’ deal in the current negotiations to revamp the 1994 trade agreement. / AFP PHOTO / Ronaldo SCHEMIDT (Photo credit should read RONALDO SCHEMIDT/AFP/Getty Images)

As we move forward crafting North American Free Trade Agreement (NAFTA) 2.0, we must be very careful to maintain current provisions that will continue to make the U.S. more secure. For example, Russia working with China, India working with Iran, mandates not just that U.S. energy security begins at home but it really begins in North America, uniting with energy-rich friends Canada and Mexico.

Sweeping away trade barriers, the trilateral NAFTA agreement has forged more stability and greater investment among the North American partners. The massive  benefits are undeniable: U.S.-Mexico Trade Facts U.S. goods and services trade with Mexico totaled an estimated $616.6 billion in 2017. Exports were $276.2 billion; imports were $340.3 billion.  And “trade with Canada and Mexico supports 14 million American jobs.”

Thanks to NAFTA, our energy security blanket is the integrated and interdependent North American oil, natural gas, and electricity markets, built on connecting infrastructure and trade across the borders of the U.S., Mexico, and Canada. For Americans, NAFTA has meant more options for affordable and reliable energy, and U.S. companies have prospered from increased competitiveness operating and investing in our northern and southern neighbors.

NAFTA’s provisions that buoy no tariffs on exchanged goods, trade liberalization, and market access must remain in the new version.  But, the most important NAFTA 2.0 effort is to retain the Investor State Dispute Settlement (ISDS) provision.  Critically, this protects U.S. investors, including energy companies, from unfair treatment and asset seizure by host nations. Protecting U.S. direct foreign investment, ISDS is “meant to protect investors from government intervention.” Weakening or eliminating ISDS, by modifying it or by the U.S. withdrawing from NAFTA, would threaten U.S. energy security.

Of course, our companies are ready to go to work all over North America: they ignited the U.S. “fracking revolution” that has transformed energy markets around the world.

In Canada, our energy opportunities are surely great. Reported by BP, Canada is third globally with nearly 175 billion barrels of proven oil reserves. And Canada’s Montney and Duvernay shale plays in British Columbia and Albert might have the most potential of any shale oil and gas field in the world.

NAFTA has continually solidified our energy alliance with Canada. Despite more than doubling our own crude oil production since 2008, our imports from Canada have still surged 75% to 3.4 million b/d. And despite a 35% boom in our own natural gas production, we still import a high 8.2 Bcf/d of gas from Canada, or nearly as much as New York and California use combined. With our electricity links strong as well, “U.S. Energy Imports From Canada Now Value $53 Billion.” Our energy partnership with friend Canada gives us political leverage: since 2008, our crude imports from OPEC have collapsed 45%.

But, it’s in Mexico where ISDS will be increasingly most valuable for us. Mexico’s energy future shines brightest. As our other OECD partners continue to age, Mexico has a third of its population under age 15. Unique for the OECD, Mexico is still an emerging economy and has the largest incremental energy needs of the entire bloc. In February, Mexico officially joined the U.S. and Canada and became the 30th member of the International Energy Agency, allowing for co-operation on “energy security, energy data and statistics, and energy policy analysis.”

With the 2013 Energy Reforms meaning deregulation, U.S. companies can now compete against and beat Mexico’s largely stagnant national energy firms; Pemex for oil and gas and CFE for electricity. Mexico is now of the best areas for new energy investment in the entire world, with an unmatched hundreds of billions of dollars in oil, gas, and power opportunities up for grabs. For example, there are now nearly two dozen gas marketers in the country, and for non-Pemex gasoline selling: “U.S. fuel distributors rushing to Mexico’s newly free market.”

Ultimately, ISDS will help us ensure that Mexico doesn’t descend into another Venezuela, which not long ago nationalized many U.S. and U.S.-allied energy assets and awarded project stakes to Russian and Chinese companies over U.S. ones. “China could be the new owner of Venezuela’s oil industry.”

Just as importantly, I think its routinely forgotten that, without that strong link to Mexico that NAFTA confirms, Mexico’s economy would suffer and the U.S. itself could easily have a major humanitarian crisis on its hand at is border – far worse than what we have there now. Peer-reviewed study after peer-reviewed study has been very clear about this.

ISDS is so vital because energy development isn’t like deciding to build cars or washing machines in Mexico: energy investment chases the geology. And with commodities like oil and natural gas, the more production in Canada and Mexico the better for U.S. consumers and for our own energy security.