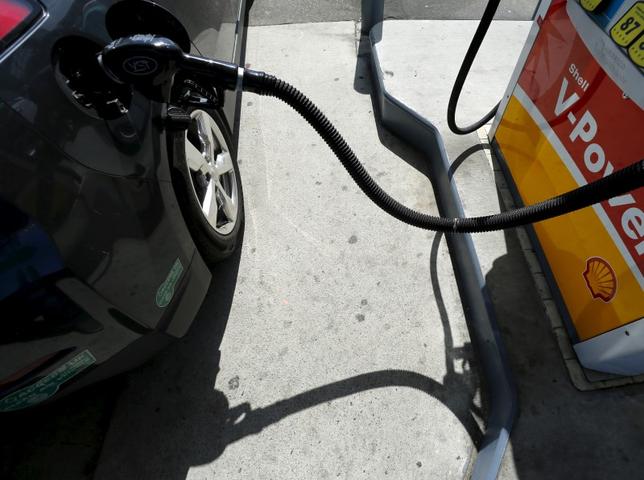 A car is filled with gasoline at a gas station pump in Carlsbad, California August 4, 2015.

Crude futures slumped again in Asian trade on Wednesday, losing more than 2 per cent as U.S. oil dropped towards $27 a barrel, its lowest since 2003, on worries about global oversupply.

That came after the International Energy Agency, which advises industrialised countries on energy policy, warned that oil markets could “drown in oversupply” in 2016.

“Oil prices are at a level where OPEC countries are all struggling. They are selling oil for cashflow not for profit,” said Jonathan Barratt, chief investment financial officer at Sydney’s Ayers Alliance.

“U.S. producers are holding out, but I think they’re bleeding as well,” he said.

The contract settled down 96 cents, or 3.26 percent, the session before.

McCarthy said the market had already taken into account the 500,000 barrels per day Iran has forecast it will add to global production.

“(Iran) is really another strike in the same beating the market has taken,” McCarthy said.

Stocks data from industry group the American Petroleum Institute is due out later on Wednesday. Official data from the U.S. Department of Energy’s Energy Information Administration will be out on Thursday, a day late due to a public holiday.

Ample storage space for crude around the world, including 230 million barrels of new storage to be completed this year, will help prevent further sharp price falls but will weigh against significant price rises, according to analysts and industry watchers.

Global financial markets seem to be overreacting to falling oil prices and the risk of a sharp downturn in China’s economy, Maurice Obstfeld, the International Monetary Fund’s chief economist said on Tuesday.