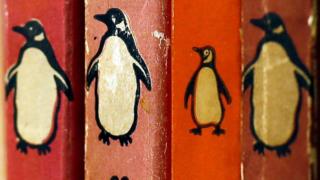 Shares in the international publishing group Pearson fell nearly 30% after the company warned of a big fall in sales in its US education business.

The company said profits for 2017 could drop by £60m and it would cut its dividend for shareholders.

“The education sector is going through an unprecedented period of change and volatility,” Pearson said.

The group will now sell its 47% stake in the book publisher Penguin Random House to bolster its finances.

In a trading update, Pearson revealed a sharp and sudden drop in its main business – the sale of printed and online books to higher education students in the US.

“Our higher education business declined further and faster than expected in 2016,” it revealed.

“We estimate 2% of this decline was driven by lower enrolment, particularly in Community College and amongst older students; 3-4% by an accelerated impact from rental in the secondary market; and approximately 12% due to an inventory correction in the channel reflecting the cumulative impact of these factors in prior years,” the company explained.

The result was an 8% fall in sales for the whole group during last year.

Pearson now expects the downward trend in its educational publishing business to continue during this year with profits for 2017 likely to be £60m lower than last year.

One step to stem this trend will be to cut its eBook rental prices by as much as 50% for 2,000 titles.

But one eye-catching change will be the sale of its near-half stake in the huge international book publisher Penguin Random House.

The company was formed in 2013 with the merger of Penguin – owned by Pearson – and Random House – owned by the German publishing group Bertelsmann, and which still owns 53% of the enlarged book publisher.

Bertelsmann may now buy some or all of Pearson’s stake in the book publisher.

In recent years Pearson has concentrated mainly on educational publishing and in 2015 sold both the Financial Times and its half-stake in the Economist.

“With the group fearing that textbooks and other educational equipment would enter terminal decline, Pearson took the bold step of changing tack,” he said.

“The group pinned its hopes on online and virtual courseware, and in 2015 sold off assets such as the Financial Times and Economist newspapers to generate the cash to hold the dividend steady through the transition.

“Those sales don’t look too smart now,” he added.