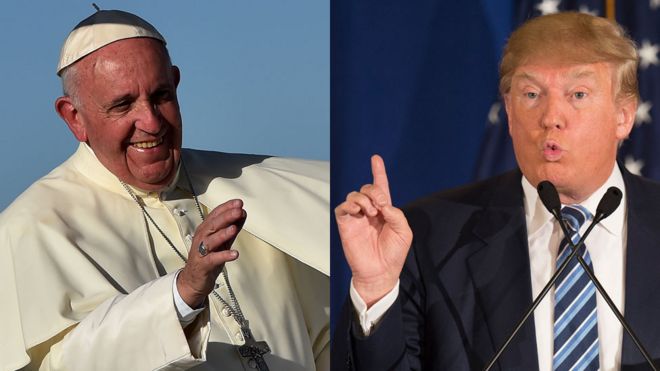 The Vatican has sought to clarify the Pope’s comment that Republican candidate Donald Trump’s plan to build a wall with Mexico to halt immigration into America was “not Christian”.

Spokesman Father Federico Lombardi said “in no way was this a personal attack”.

He said it was the Pope’s long-standing belief that migrants should be helped and not shut behind walls.

The row erupted after Pope Francis said “a person who thinks only about building walls… and not of building bridges, is not Christian”, which was roundly condemned by the billionaire businessman.

But Father Lombardi told Vatican Radio on Friday that Mr Trump had not been singled out by Pope Francis and “nor was it an indication on how to vote” in the US presidential election.

He said the Pope believed people “should build bridges, not walls”, referring to the thousands of migrants flocking onto European shores over the past 12 months.

“This is his general view, which is very consistent with courageously following the indications of the gospel on offering welcome and solidarity,” he added.

The presidential candidate also softened his rhetoric later on Thursday, heaping praise on the Pope at a town hall event in South Carolina where he is leading the polls ahead of the state’s primary on Saturday.

22 things that Donald Trump believes – What are his policies and beliefs?

What would a Donald Trump presidency be like? – Anthony Zurcher imagines a Trump White House

Trump v Pope… who wins? – Will this harm his chances in the primary elections?

Trump turns notoriety into a win – After New Hampshire, is Mr Trump unstoppable?

He said the pontiff was misinformed when he criticised the proposed wall, because he was not aware of the drugs coming in and the other security problems that made a strong border a necessity.

His anti-immigration stance is a central plank in his campaign – he wants to deport 11 million undocumented migrants and said Muslims should be temporarily barred from coming to the US.

The greatest threat for Mr Trump, who has no political experience but won in New Hampshire, is Texas Senator Ted Cruz, who won the Iowa caucus.