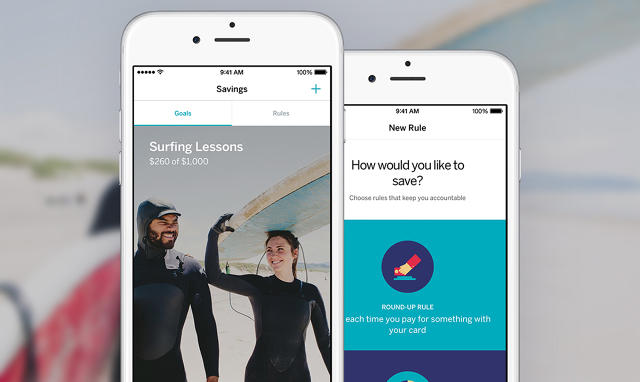 Millennials aren’t saving money. When you’re living paycheck to paycheck, Excel spreadsheets are not always the first thing on your mind. Services like Mint give you a broad look at your finances, but there’s something missing in the app-focused millennial toolbox for saving toward goals. Swedish startup Qapital launched its saving service in March to help you regularly put away money for big-ticket items and trips, but today they’re releasing something new: IFTTT (If This Then That) functionality. Now you can set up savings triggers to automatically put money toward savings goals every time you buy from Starbucks or walk another mile. Qapital hopes this new feature gets more millennials saving toward their goals—and maybe paying more attention to just what they’re spending their money on.

Qapital grew out of the Swedish financial tech scene, built by ex-bankers who saw opportunity in millennials’ irregular saving behaviors. Qapital first built a Mint-like service for Swedish users to track their finances, but decided to build a completely new product in the U.S. The U.S. market was a better pitch for venture capitalists, says Qapital CEO and cofounder George Friedman, but U.S. financial startups had already created data access pipelines to data from big U.S. banks. Qapital partnered with one of these, Plaid, so Qapital could focus on their service.

“American banks are much more open to innovation, believe it or not. The API for bank data is available in the U.S.,” says Friedman. “So [partnering with Plaid] helped us go to market, because in Sweden, we would have had to build in all funnels to banks ourselves. With partners, we can be the front end layer, and now we’re 100% focused on the U.S.”

American users can set up separate FDIC-insured Qapital-branded savings accounts into which they can automatically drop money from their existing checking accounts. Being able to use IFTTT recipes to link Qapital users’ walking, buying, or even web surfing behaviors with financial planning expands the saving service into something of a lifestyle app: Rewarding yourself with a deposit every time you reach a goal creates a positive feedback loop, while depositing money in your savings account every time you buy a latte can really make you think twice before you pony up for fancy coffee.

Setting up a savings goal on Qapital’s mobile app (available for just iOS for now, but on Android by the end of the year) is simple: Name a goal and a financial target, and choose a photo (this is key to helping you emotionally invest in your goal). Boom, you now have a bucket to catch deposits for your particular financial goal. Setting up a rule to trigger a deposit toward that goal is a little more involved: Choose a savings model and log in to Qapital’s IFTTT page to choose what “recipe” actions—like posting on Facebook or closing an issue on Github or achieving your daily step goal—triggers a money transfer from your personal debit account toward that specific goal on your Qapital account. Note that the action’s platform (Facebook, Github, your phone’s step counter) must have IFTTT functionality—you can look up which services do on IFTTT’s website.

Qapital has only been testing the IFTTT functionality within its team and a handful of outsiders; so far, it can only guess which recipes and saving methods will be most popular—or, indeed, if behavioral saving will push millennials to save more than they currently do. That Qapital is aiming straight for millennials is certain: The app is a lean, pretty tool (built by designer twins Daniel and Andreas Källbom of Studio Källbom, who helped build Spotify’s mobile apps) with plenty of real estate devoted to photos that represent your goals. But it’s Qapital’s positive approach to saving that speaks most to cash-strapped millennials: Instead of the restrictive negativity of budgeting, Qapital focuses on goals, on saving while you spend.

“It’s moving away from calculation and toward that goal you emotionally care about,” says Friedman.

For a financial startup, Qapital’s FAQ page is refreshingly candid and simple, explaining why money transfers take time and which of Qapital’s partner companies see your data—another sign that the company has millennials in its sights. Entering a barren job market caused by the Great Recession has soured millennials on big banks, says The National Journal, and Friedman believes that Qapital speaks much better to millennial sensibilities than big banks do.

“Introducing a new banking product is a huge hurdle in terms of trust and putting yourself out there, but millennials are just way more open to new services, and they’re not really expecting banks to pull this off for them,” says Friedman. “Millennials trust different things. They trust design and they trust the message, which are very different factors than the older generation.”

Before you ask, yes—Qapital has some ideas about what it might do with data from your Qapital account activity. But Qapital says it’s only thinking about suggestions for deals or products relevant to your saving goals. Saving for a trip to Paris? Want to see deals on flights or lodging inside your Qapital app? Ideas like that one are still hypothetical spitballing, Qapital says, as it is mostly focused on its full slate of releases planned through the end of the year.

In the next few weeks, Qapital will partner with Intuit (which makes the finance software behind Quickbooks), which will expand Qapital’s dynamic IFTTT recipe features to users with accounts at over 20,000 smaller banks across the U.S. By the end of the year, Qapital will release its own branded Visa debit card through the bank that backs all Qapital accounts, the Iowa-based Lincoln Savings Bank.