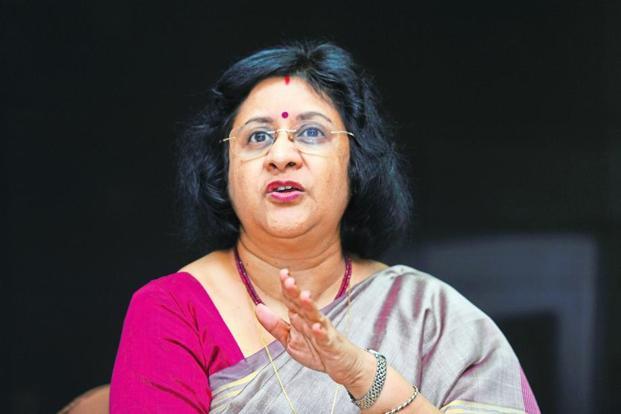 SBI chief Arundhati Bhattacharya says in 2017-18 the bank will be focusing on listing its life insurance arm. Photo: S. Kumar/Mint

Mumbai: State Bank of India (SBI) on Friday said it will not require any capital infusion by the government for the next two years, after raising Rs15,000 crore through a qualified institutional placement (QIP), the largest share sale in the secondary market by a bank.

“As per the plan we have put in place, we are quite comfortable on the capital front till next year. We will not require government funds (in FY18),” SBI chairperson Arundhati Bhattacharya said in a press conference in Mumbai.

“At this point we have not asked for capital (from the government). Even without this capital raise, we can meet all the regulatory capital requirements up to 2019, including Basel III needs.”

She added that in this fiscal, the bank will be focusing on listing its life insurance arm. “We have plans of unlocking value by listing at least the life insurance subsidiary. There will be some more (capital) that we (will) get through our non-core divestments.”

SBI had opened the share sale through private placement on 5 June (Monday). In a regulatory filing, the bank said its central board decided to close the issue on Thursday and had accorded its consent for the issue of approximately 522 million shares at a price of Rs287.25 for an aggregate value of about Rs15,000 crore.

On Friday, the bank slashed the interest rate on home loans above Rs75 lakh, the first to do so after the Reserve Bank of India’s decision to reduce risk weights. SBI reduced the home loan rate by 10 basis points to 8.55% from 8.65% earlier. The new rate is effective from 15 June.

RBI on Wednesday had said that the risk weights on loans above Rs75 lakh will be reduced to 50% from 75% previously. This will help banks in saving capital, which can be used for further lending.

“Taking a cue from the recent central bank reduction in risk weightage on home loans, SBI is passing on the benefit to its customers by reducing its interest rates on home loans above Rs75 lakh,” said Rajnish Kumar, managing director (national banking) at SBI. After the QIP, the government’s stake in SBI has come down to 57.07% from 62.22% earlier. The capital adequacy ratio of the bank jumped 79 basis points to 13.64%.

Under Basel III norms, banks are required to maintain a minimum capital adequacy ratio of 11.50% by March 2019. Capital adequacy is an indicator of banks’ financial strength, expressed as a ratio of capital to risk-weighted assets. SBI expects credit growth of 10-12% in the current financial year.

“For SBI, Rs15,000 crore is 4% of consolidated equity at the end of the March quarter. If the assumptions they hold get more aggressive than what they envisaged, the bank might require additional capital in the next financial year,” said Saswata Guha, director at Fitch Ratings.

Reuters contributed to this story.