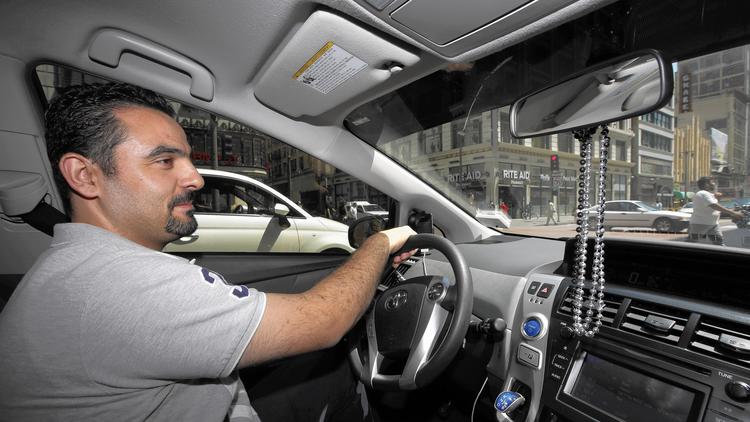 Silicon Valley has created a new breed of American worker: neither employee nor contractor, indispensable to the company but free to work as much or as little as they please — with no real boss.

Together, companies including Uber, Airbnb, TaskRabbit, GrubHub make up the so-called sharing economy, a burgeoning marketplace of digital platforms connecting freelance providers with customers wanting a ride, a place to stay, random errands or grocery delivery.

As the companies proliferate, government regulators are scrambling to rein them in. City and state officials are pushing to protect worker rights while start-ups — insistent that they are merely providing the technology for a network of independent workers — want to be left alone.
The solution, labor and tech watchers say, may have to be a compromise: A new class of workers, protected by laws that take into account the emerging business model. Some advocate a new category of worker — the “dependent contractor,” technically self-employed but reliant on income funneled through a third party. Germany and Canada have special protections in place for such laborers.

“Our legal system is set up so we’re either one or the other — an employee with a whole lot of rights, or an independent contractor with almost no rights whatsoever,” said Janelle Orsi, executive director of the Sustainable Economies Law Center. “We now have a whole sector of workers who are independent in the way that they choose to work. Yet, they are dependent on a singular platform for their livelihood.”

Uber and Lyft drivers, for instance, assume most of the risk, using their own vehicles and working without benefits. But they also love the flexibility of working whenever they want — or not.

“That’s where the entrepreneurial spirit comes in,” said Kindred Sheppard, 48, who drives his Toyota Prius around the San Francisco Bay Area for Uber. “I don’t need Uber to tell me when to take days off. No one’s forcing you to drive — if you don’t want to drive, get a job.”

The start-ups are nervous, especially after a California Labor Commission ruling this week that declared one Uber driver an employee of the company rather than an independent contractor. Although the decision sets no immediate precedent, it sets the stage for court appeals that could result in much broader regulation.

Restrictive new rules could cripple many on-demand start-ups. They rely on low overhead, making their money by taking a small percentage of each transaction between workers and customers.
Companies fear that their astronomical valuations could slump if their costs rise with mandated employee benefits, insurance and overtime. They would probably endure even more legal challenges and, in some cases, could be forced to shut down if their customers won’t absorb necessary price increases.

In the near term, they could be on the hook for back wages, overtime claims, old expenses and extra taxes. Weaker businesses may struggle and be swallowed up by their stronger rivals.

“Their economic structure, their financial structure, their corporate structure, how they organize their business model is all built upon assumptions that they’re not employing people directly,” said Stephen J. Hirschfeld, chief executive of the Employment Law Alliance. “If the courts come down and determine that you have to treat them as employees, these companies are probably going to have to reinvent themselves.”

Regulation would also affect millions of workers. Such companies now account for an estimated 2 million to 3 million people out of a total 30 million independent contractors in the U.S.

In theory, companies such as Uber enable workers to earn a living at their own pace.

For people left jobless or underemployed after the recession, it’s an opportunity to supplement skimpy paychecks.

Any major change to how these workers are classified is a thorny process, involving changes at the Department of Labor and the Internal Revenue Service and delicate navigation through a patchwork of minimum wage, sick pay and termination regulations that vary from state to state.

Some experts suggest allowing rideshare drivers and similar workers to unionize or to make over the companies as co-operatives. Others say that rules should be written on a case-by-case basis, as they have been in the past for salon workers in California and hotel workers in Los Angeles.
Politicians want some kind of standardization, saying that hazy definitions of workers can lead to employer abuses.

The government has “a responsibility to provide clarity and predictability instead of allowing inconsistency and confusion as these issues are litigated on a case-by-case and state-by-state basis,” U.S. Sen. Mark Warner (D-Va.) said this week.

Although Uber says its main role is running the smartphone app that connects drivers and passengers, the company controls which drivers can be allowed into the system after passing a background check, what kind of vehicle they may drive and how much they can charge for rides.

“Uber has toed that very blurry line of being an employer,” said Jeff Tennery, CEO of Moonlighting, a hiring platform that connects independent contractors to customers. “An Uber driver can’t really differentiate themselves — it’s like sitting in a deli line. They can’t do anything but wait to be called.”

The issue is also a complicated one for workers, who often see it as a clash between freedom and sustainable pay. Santa Monica resident Lee Baxter, 28, has experienced both sides.

Baxter works for Postmates, a delivery service that classifies its workers as independent contractors, as well as Clutter, a moving service that he said recently began treating its workers as employees in order to provide workers compensation to injured laborers. He also independently rents out audio-visual equipment, repairs computers, works a temporary office job and is considering becoming an Uber driver.

“I’m just grateful for the opportunity,” he said, “whether it’s through employment or being an independent contractor.”