The vastly conflicting signals Indian economy was throwing up until late 2018 appear to have finally aligned. Nearly every macro and micro economic indicator is now pointing towards a slowdown that is tightening its noose around the Indian economy, slowly and steadily. There are no ifs and buts about this one. India is well and truly in the grip of a slowdown that is threatening to get worse by the day.

For a long time, until late last year, at least 2 of those engines were still firing while the other two had gone bust a couple of years back. First, since the government was still pumping resources into infrastructure building, public investment was growing at a healthy clip. Second, despite GST and DeMo shocks, at least some parts of the domestic consumption economy such as auto, consumer durables and FMCG were growing at a healthy clip of 15-16 per cent.

This contrasted vastly with the failure of the other two engines – exports and private investment – since the past few years. That held out hope that anti-bodies in the economy were fighting for survival. India’s exports which had peaked to $314.88 billion in 2013-14, had declined to as low as $262.2 billion in 2015-16 before recovering partially to $303.3 billion in 2017-18, still way short of the 2013-14 numbers. The fourth and the most damaged engine – private investment – is teetering on the brink. Fiscal 2018-19 saw new investment proposals at barely Rs 9.5 lakh crore, the lowest in 14 years since 2004-05, dramatically lower than an average of Rs 25 lakh crore in the period 2006-07 to 2010-11. According to CMIE, while private investment usually accounted for two-thirds of total investment in the economy, since 2014, its share had fallen drastically to just 47 per cent by 2018-19, indicating that the economic growth was being dragged along primarily by public expenditure.

But that was only until last year.

New indicators suggest that with domestic consumption seeing a worrying dip recently, the 2 vs 2 engine status of the economy has now changed to 1:3. The last engine itself slowing down in the latter half of fiscal 2018-19. No economy can run on a single engine, especially when that too is sputtering.

Just as the Centre’s financials began dwindling towards the end of financial year and its fiscal deficit got out of control, the government slammed the brakes on expenditure to keep the fiscal deficit within the committed 3.4 per cent. It was necessitated by the twin effects of lower government income and higher-than-projected expenditure. While GST and direct tax revenues fell short of expectations (direct taxes by Rs 40,000 crore and GST by over Rs 60,000 crore), the government also committed additional expenditure on new schemes introduced mid-year such as PM-SAMMAN and PMJAY.

Other measures of the economy are on a downward spiral. Industrial activity is slowing as evident in the index of industrial production. IIP growth of 3.69 per cent in the quarter ended December, 2018 is the lowest in the past 5 quarters. January IIP fell further to just 1.79 per cent. Febuary IIP was even lower at just 0.1 per cent-the lowest in 20 months.

Electricity generation is another indicator of industrial activity. In 2018-19, power generation grew 3.56 per cent, the lowest in the past 5 years. Growth in finished steel production is the second lowest in 5 years. 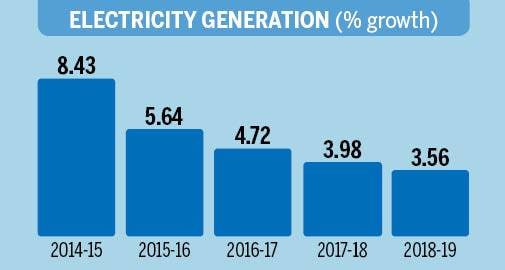 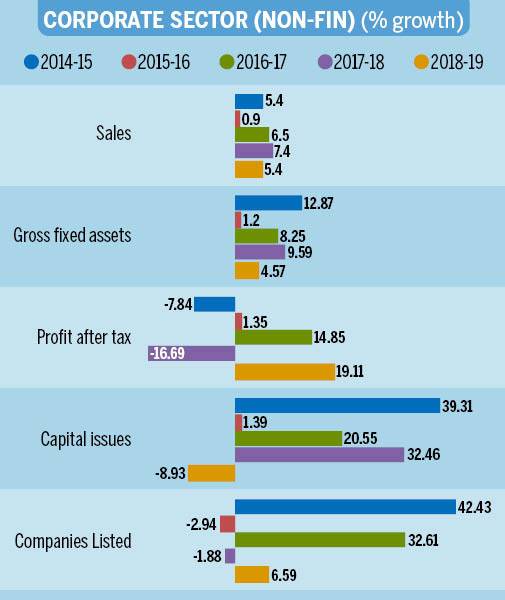 As bad news has piled up, it has had a bearing on consumption. The consumption economy which was defying gravity all along has shown serious signs of stress in the last few quarters. Passenger car industry grew just 3 per cent in 18-19, the lowest in the past 5 years. Car buyers’ sentiment has tanked in urban markets in past 3 quarters. Maruti, which sells one out of every two cars sold in the country has reported an 8 per cent drop in urban sales in Q4, preceded by -1 per cent in Q3 and -3 per cent in Q2. Rural car sales are still in the positive, but slowed to just 2 per cent in Q4 against 15 per cent in Q3. CMIE’s consumer durables index for December, 2018 was at its lowest in the past 4 quarters. 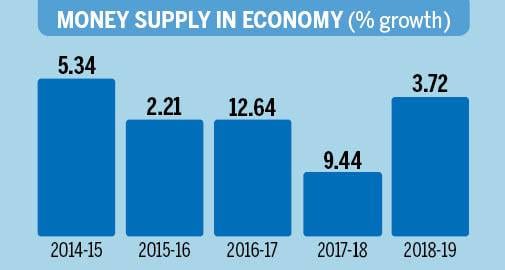 Downtrend in petroleum product consumption also points to slowdown. The quarters ended September and December, 2018 with 1.4 and 2.2 per cent were the worst in growth in petroleum consumption in the past 7 quarters.

Evidence from the financial services industry suggests a similar trend. RBI reported over Rs 1 lakh crore fall in bank credit in the latest fortnight of April 12.

Among other macro indicators, goods exports until 2017-18 were lower than they were in 2013-14 at $314.4 billion. It meant India squandered the opportunity to participate in 5 golden years of world trade when the global trade grew at a very healthy 3-4 per cent per annum after nearly a decade of a debilitating slowdown. This year, exports are projected to be just above $331 billion, barely 5 per cent higher than the 2013-14 numbers. But India clearly missed the bus in the interim when the world economy was on an upswing.

There are some bright sparks still. For instance, real estate, where commercial segment is doing very well while demand is picking up in residential segment as well. But remember the realty sector is rising from the ashes. And low base effect may be at play there.

Rising From The Ashes

So, how do we emerge from this unscathed?

There is no magic wand. But the economic formula to recover from a slowdown or recession is so simple that it has been deployed over and over again around the world-in US, China, Germany-with amazing regularity and success. When the chips are down, the government has to take the lead with public expenditure-loads of it-and for years on end. Public investment through infrastructure building, for instance, revived the US through the Great Recession. Infrastructure and allied industries-when pumped with demand-create demand in those sectors. Done over a long period of time, it has a contagious effect on growth. India must do that with renewed vigour.

If public investment starts firing up the consumption engine, even in select sectors to start with, it could substantially bridge the 25-30 per cent gap in capacity utilisation in various sectors over 3-4 quarters. It is this gap that has stayed put in the last 4-5 years which has prevented private consumption from coming back. Especially, greenfield investments in new capacity building. Only then will the private sector be emboldened to rethink new capacity creation.

If the economy continues its downward spiral, it may even require an economic stimulus. But we haven’t reached that stage just yet. Also, demand side measures such as aiding consumption tend to have a longer term impact than supply side measures such as one-off fiscal stimulus whose impact could wane soon enough.

There are other avenues too. India’s high interest rates provide an opportunity for monetary policy intervention by kick-starting growth via lower interest rates.

And, finally, India has to re-examine its exports policies to be able to participate in global economic growth. Our strategy to deal with the world economies is hopelessly outdated. The era of economic nationalism sweeping through the world economies cannot be tackled with export strategies of 1990s that we are trying to revisit over and over.

There is a lot to look forward to in the economy though. Fiscal 2019-20 will be the first full year of deployment of PM-SAMMAN, the direct benefit transfer to farmers. If BJP comes back to power, the scheme alone will pump in close to Rs 2 lakh crore into the hands of poor and rural folks, as against just Rs 25,000 crore in 2018-19. If Congress is in power, it will be Rs 6 lakh crore under NYAY. Both should be big drivers of consumption.

But, above all, Indian economy must bank on the huge billion plus consumers who can revive the nation from the worst possible downturn with sheer mass and volumes. Provided, we play our cards right and desist from shock therapies.