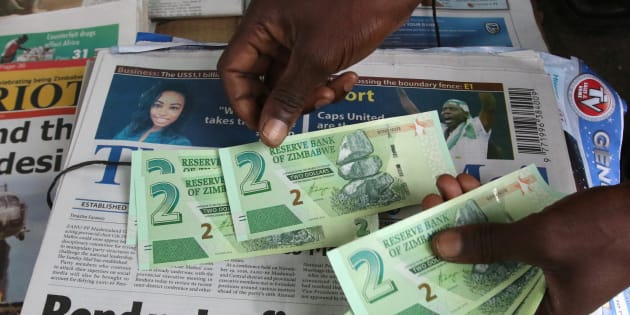 Zimbabwe is currently confronted by a currency crisis that has seen it abandon its national currency and use a range of currencies together with the introduction of bond notes. This has, however, failed to stop crippling cash shortages and inflation. Speaking at the 2010 Zimbabwe institute of chartered secretaries conference, I argued that at the minimum, Zimbabwe will have to think of reintroducing a currency of its own in order to support any large-scale transformative national development initiatives. Currently, there is a strong push for the country to adopt the South African rand as legal tender.

However, the mere reintroduction of any currency (including adopted currency) does not automatically translate to gains. Rather it is necessary that any efforts to control the crisis focus on ensuring credible political accountability. Failure to embed credible political accountability and simply using another country’s currency is akin to abandoning your own household cat because it is infested with fleas, and adopting the neighbour’s flea-less cat. Whilst this may temporarily solve the situation, it is most likely that soon the new cat will also be infested with fleas, no matter how clean it was when it arrived.

The solution is to rather get rid of the fleas.

The importance of credible political management simply can’t be over-emphasised. This is because the stability and credibility of a currency reflects the extent to which a government’s policies are considered credible by investors, as well as the public at large. An accountable government will generate credibility and trust amongst the populace and investors. As this trust grows, the views of the government, investors and public on the expectations of prices in the future converge. This leads to the “anchoring” of inflation expectations – a key to successful monetary policy making.

However, when government policies are discredited, expectations are unanchored and prices will start to be influenced more strongly by recent or current developments. This renders the currency unstable. It is important to highlight that while adopting a foreign currency may bring some relief, this will only be temporary – as the more important determinant is the credibility of government policy implementation. If government policy implementation continues to lack credibility, price expectations will remain unhinged and inflation a problem – rendering whatever currency is in use unsuccessful in ensuring price stability.

How then can the present Zimbabwe government deal with its currency crisis and anchor expectations? While there are arguably many ways to do this, it is important that the one chosen be founded on bringing back government policy credibility – something which has been lacking for the past two decades.

The government will also have to build the state’s regulatory capacity, among other things, to ensure that the existing legal institutions are able to investigate and prosecute misconduct in a timely and objective manner.

The first thing government needs to do, is to ensure sufficient policy independence of both the central bank and the ministry of finance, while aiming for conscious complementarity between monetary and fiscal policy. Sufficient policy independence in this regard means that the two institutions are led and staffed by qualified people who can make policies and decisions based on the country’s developmental goals and not political considerations, as has been the case in the past.

The government will also have to build the state’s regulatory capacity, among other things, to ensure that the existing legal institutions are able to investigate and prosecute misconduct in a timely and objective manner. More importantly, government has to start investing in initiatives aimed at restarting the country’s manufacturing sector and agro-industry productivity. The past two decades has seen the government abandon such investments, leading to large scale informalisation of the economy.

The next logical question therefore is to ask where funds for such investments will come from, given the state of the country’s economy? While it is true that external investors and development partners can assist, it is imperative that Zimbabwean policy makers also show their commitment to using local sources.

The recent immunity granted by the government to those who illegally externalised money provides such an opportunity. From January this year, the government has given a three-month immunity to those who return funds that had previously been siphoned out of Zimbabwe. According to estimates by the Zimbabwe central bank, almost US$2-billion (~R23.5-billion) was externalised in 2015 alone. Other estimates are that around $3 to $5-billion (R35.2 to R59-billion) in externalised funds can be recovered by Zimbabwe.

The recovered funds must be ring-fenced and used to invest in initiatives aimed at restarting the country’s manufacturing sector and agro-industry productivity.

As of now, it is not clear how the recovered fund will be processed. It is important, though, that these funds are used to support the government’s credibility by ensuring that the funds are processed in a transparent and accountable manner. More importantly, the recovered funds must be ring-fenced and used to invest in initiatives aimed at restarting the country’s manufacturing sector and agro-industry productivity. Above all, the funds must not be used to fund recurrent expenditure, because it does not build the country’s production base and hence will not create employment.

If the government can do this and do it in a transparent and accountable manner, it will gain credibility and a lot of goodwill from investors, development partners, and importantly, the people of Zimbabwe. This in turn will start to anchor inflation expectations. In the end, what currency the country will decide to use will inevitably become less of a problem than it is now, and will facilitate the country’s chances of reintroducing its own currency.