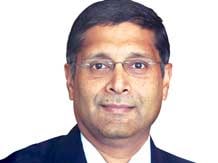 Implicitly questioning the RBI’s monetary stance, Subramanian said real policy rates were too high for companies that were deep in debt.

RBI recently cut repo by 0.25 percentage point, taking the rate to 7.25 per cent in three reductions since January. However, some experts had said this was inadequate and more cuts were needed.

“So, is the stance of current policy appropriate? Of course, that is difficult to say, but at the very least, there needs to be a more analytical discussion,” Subramanian wrote in a recent blog on VOX, Centre for Economy Policy Research’s Policy Portal, which carries research-based policy analysis and commentary.

There should be a greater recognition that these are “unusual times”. Real policy rates have diverged significantly for consumers and producers and are unusually high for the latter, he said in the blog, Indian monetary policy in unusual times, uncharted waters. “For producers, high real rates must also be seen against their balance sheet problems,” he wrote.

Virmani, part of the technical advisory committee of RBI, said policy rate could be cut by 1.25 percentage points more as a decline in retail inflation had made real interest rates higher.

He made these comments in Mumbai.
Not going into the specifics of consumer price, wholesale price and GDP deflator issues, Virmani said consumer price inflation had declined by three percentage points over the past 12 to 18 months, raising real interest rates by two to three per cent. “Thus, policy rates can safely be cut by two percentage points,” including the 75 basis points of reductions already announced this year, he was quoted as saying by Bloomberg. He, however, did not give any time frame.

Asian Development Bank President Takehiko Nakao had on Tuesday made a case for further rate cuts, saying at 7.25 per cent the repo was not that low.

Subramanian said from a firm’s perspective, real interest rates of 7-7.5 per cent were high in normal times, but even more so when balance sheets were stressed, as high rates implied greater debt rollover costs. Subramanian said the objective of a monetary policy was to create confidence in the economy by maintaining a stable price environment for consumers, producers, savers and investors.

RBI’s technical advisory panel had called for a rate cut two days before a surprise reduction in January.