On November 7, 2014, the Central Board of Direct Taxes (CBDT) issued an office memorandum, laying down certain steps that income tax officials must conform to for achieving what it called a non-adversarial tax regime — a taxpayer-friendly environment.

By asking its officials to refrain from indulging in the scrutinies involving long and non-specific questionnaires, and high-pitched assessments without proper basis, the CBDT wanted to send a message to both individual and corporate taxpayers that the department was for their facilitation and not harassment. A month later, another such circular was issued to all the senior tax officials, directing them to quit resorting to coercion and pressure for admission of undisclosed income during searches and survey. Cut to March 2015. Foreign institutional investors (FIIs) got a rude shock when they received tax demand notices from the income tax department, asking them to make payments toward the minimum alternate tax (MAT) on the past capital gains, hitherto not taxed. Notices had been sent in 68 cases, seeking taxes worth Rs 602.83 crore, as informed by Jayant Sinha, Minister of State for Finance, to Parliament. The issue attracted outrage of foreign investors, who started questioning the stability of the Indian tax regime under the present government.

Even as the finance ministry rolled into action to pacify some 1,000 FIIs across the US, Hong Kong and Singapore, another crisis was in the making. A few weeks later new income tax return (ITR) forms — ITR-1, ITR-2 and ITR-4S — would be released, seeking intrusive details such as number of foreign trips undertaken, and bank accounts held. The move drew widespread criticism for the enhanced compliance cost and burden, yet again forcing the government to back-peddle. And, suddenly, the image-makeover exercise the tax department had embarked on seemed to fall on its face with questions arising on the efficacy of the government’s initiatives to usher in the so-called non-adversarial tax regime.

Revenue secretary Shaktikanta Das emphasises that in the past one year the government has taken several steps to make taxpayers’ life simpler. “We are giving it the highest priority. For both individual and corporate taxpayers, we have given clear instructions to the field formations to adopt a non-adversarial tax regime. Officials have been told to give highest priority to redressal of taxpayers’ grievances along with speedy disposal of rectification and TDS mismatch cases,” Das told The Indian Express.

As far as overall tax environment is concerned, the Budget 2015-16 laid down a clear roadmap for moving towards a taxpayer-friendly environment and now, separate, exclusive verticals have been created for dealing with dispute resolution and tax exemption cases, the revenue secretary said.

But though efforts are on to ensure that honest taxpayers don’t suffer, as evident by the black money law which has been brought in where the government is also giving a one-time opportunity to tax evaders to come clean, the pace is slow and ground realities are yet to change, tax expert Uday Ved said. The government’s decision to not appeal in the transfer pricing case of Vodafone, which the department lost in the Bombay High Court, reflects the intent of the government to usher in a conducive tax environment, he said. But again, “there is dichotomy in high tax collection targets and such a regime,” he rued. 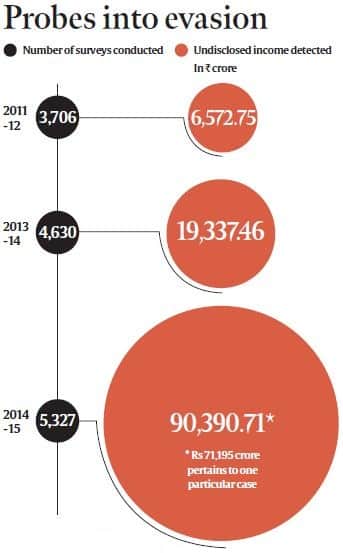 A look at past tax collection targets shows that they have almost always fallen short of the Budget estimates (BE). In 2013-14 while the BE for direct taxes was Rs 6.68 lakh crore, the actual collection was only Rs 6.38 lakh crore. Similarly, in 2014-15 while the BE was Rs 7.36 lakh crore, the actual collection stood at Rs 6.95 lakh crore during the year. Officials in the department say their induction training is oriented towards the detection of tax evasion and only recently have the initiatives been taken to introduce soft-skill inputs for the training programmes.

A field official said that the increasing role of the department in revenue mobilisation efforts of the government places more pressure on officers, for which even coercive measures are taken by them, leading to complaints. While the income tax law clearly lays down the dos and don’ts, there are certain grey areas to which “nobody has answers to and these get exploited by both the field officials and the taxpayers”.

Another field official from the capital said that while there is a massive rise in complex business transactions, which takes a lot of time to understand, there is little or almost no guidance for assessing officer who makes the assessment. “Therefore the assessing officers almost always take a pro-revenue stand, resorting to the safest route. This is perceived as tax terrorism by the affected party,” the official added.

To avoid any excesses or high-handedness while implementing the law, “senior officials have to be hands-on as it is very difficult to lay down the guidelines for complex business deals. But that is not to say that there is a trade-off between revenue augmentation and non-adversarial regime,” the field officer said. While the department itself seems surprised to be labelled as adversarial given the fact that of around four crore returns that it receives annually, only 1 per cent or three lakh assessments are taken up for scrutiny, corporate and tax experts say that much remains to be done to change realities on the ground.

Mohandas Pai, chairperson of the board of Manipal Global said, “I don’t think it is being implemented on the ground. This is not the way to function. Tax collection has turned into tax extortion. In the past five years the tax collection is target has been increased and many demands have not been reversed. Root cause is very high tax target set by the government.”

He said that while the current government has tried to temper it down, tax assessments have led to huge tax disputes largely based on transfer pricing. “It is known that 75 per cent of the transfer pricing cases have been turned down by the Supreme Court. The finance minister should have done more as is evident in Cairn, MAT-FII and I-T returns cases which have been handled very badly by the department. For corporates, tax reforms have been lacking in the last two Budgets. Today there is great fear among corporate and individual taxpayers of tax officials who are making huge perverse demand unfettered by accountability. There is no action against such officials for raising such demands,” Pai said.

What also compounds the problem is the fact that litigation in the department takes several years to settle down while many of these disputes are frivolously filed by the department and later turned down by the courts and tribunals.

So, while several steps have been taken to improve the tax environment, there is clearly a need to do more, says Kiran Mazumdar Shaw, CMD, Biocon Ltd. “I think there are some good moves but clearly they need to do more. There are still a few concerns as many cases have not been closed. The tax terrorism is coming to an end but a few cases need to be resolved,” she said.

All the same, industry body CII said the government is sending all the right messages as far as consistency, predictability and clarity of tax policy is concerned.

“We welcome the sincere efforts of the government in bringing out a fair, transparent and non-adversarial tax regime… the finance minister has pledged to bring down corporate tax to global rates in the next four years,” Chandrajit Banerjee, director general, CII, said.

When asked about the concerns over “renewed tax terrorism” in India, Jaitley, who is visiting the US for attracting foreign investments, last week told news channel CNBC that “the age of that kind of aggressive adversarial tax regime is over. We will probably have one of the more tax friendly regimes in India”. However, tax experts differ. Even though the CBDT has told the field formations to not issue summons without adequate caution, MNCs fear that they are being unfairly targeted.

Daksha Baxi, executive director, Khaitan and Co, said that the MAT on FII was a controversial issue and “… if you want a non-adversarial tax regime then don’t send notices for cases which are pending before courts”. The view was echoed by Uday Ved who said that foreign investors continue to remain concerned about the unstable tax regime.

However a Mumbai-based tax official pointed out, “there is a gap in their understanding of the law while the revenue department has a fear that these MNCs can shut down anytime and run away. MNCs feel that the tax authorities are being more aggressive with them compared to their domestic peers. However that comparison is wrong as the two are not similarly placed. There are definitely ambiguities in the law.” The way forward, as the revenue secretary puts it, is a change in mindset. “The mindset, attitude and the approach has to change. Things don’t improve overnight. However, now the department is more pro-active and responsive. This itself reflects the intent,” he said.