India’s capital markets have caught the attention of foreign institutional investors or FIIs. Encouraged by signs of economic revival under the new government, they pumped in Rs 1,60,000 crore in Indian equity & debt markets between May 16 – when election results were announced – and November 12.

Of this, equities got Rs 50,600 crore. In the same period of the previous year, net FII inflows into equities were Rs 24,471 crore; there was a net outflow of Rs 80,377 crore from debt. “It appears that this time FIIs are here for the long haul,” says Vikram Dhawan, director, Equentis Capital.

These inflows, and the resultant market rally, are happening at a time when countries across the globe are facing rough weather. Europe is struggling to come out of recession. Developing economies such as Brazil, China and Russia, too, are facing headwinds. Amid this, India is emerging as a favoured investment destination as the new government focuses on growth, economic reforms and business-friendly policies.

Nilesh Shetty, associate fund manager, equity, Quantum Asset Management Company, says, “The strong election mandate substantially reduces political risk over the next five years. The perception that the new government is pro-business has increased India’s potential. FIIs have increased exposure to India due to its attractiveness versus other emerging economies.”

We analyse FII flows after the formation of the new government and sectors/stocks they are betting on.

There have been big changes in preferences of FIIs since last year. The financial services sector has emerged as the most favoured since May this year by attracting Rs 11,024 crore till October 15 as against an outflow of Rs 5,666 crore in this period previous year.

Telecom services has got Rs 7,375 crore since May 16, nearly 15 times more than the Rs 487 crore received in the same period last year. It is followed by pharma & biotech, which has attracted Rs 5,248 crore. It was a favourite last year also and attracted Rs 4,125 crore, the third among all sectors.

Software and services, the most preferred last year with net investment of Rs 3,535 crore, is at the fourth rank; it has got Rs 7,366 crore from FIIs.

Auto & auto component and oil & gas sectors are among the top six this year with FII investments of Rs 3,304 crore and Rs 2,409 crore, respectively.

Ravi Gopalakrishnan, head of equities, Canara Robeco AMC, says, “Companies with domestic-oriented models which lost momentum in the past two years are generating a lot of interest. Thus, automobile, financial services and capital goods have started getting FII money.”

Let’s see what is driving FII interest in the top five sectors in which they have invested this year.

According to data from NSDL, FII hold assets worth Rs 4,29,859 crore in banking and other financial services. NSDL is an equity market depository.

According to experts, FIIs expect pick-up in economic growth to increase demand for credit. Besides, favourable macroeconomic variables such as plunging commodity prices, declining fiscal & current account deficits and falling inflation should trigger a fall in interest rates, which will be positive for the sector.

V Balasubramanian, head, equity and gold, IDBI MF, says, “Banking and finance sectors reflect the state of the economy. Hence, their shares will be the first to rise when growth picks up.”

Dhiraj Sachdev, senior vice president and fund manager, equities, HSBC Asset Management (India), is bullish on private sector banks. “Private sector banks may grow by maintaining asset quality while state-owned banks may face the challenge of non-performing assets or NPAs. We expect NPAs of state-owned banks to peak out over the next one-two quarters and their G-sec investments to pay off as interest rates fall. While valuations are attractive, structural issues persist. Non-banking financial services, or NBFCs, may recover due to improvement in the commercial vehicle market and higher home mortgage volumes. Other financial services businesses like microfinance, broking and insurance, too, should show better growth.” 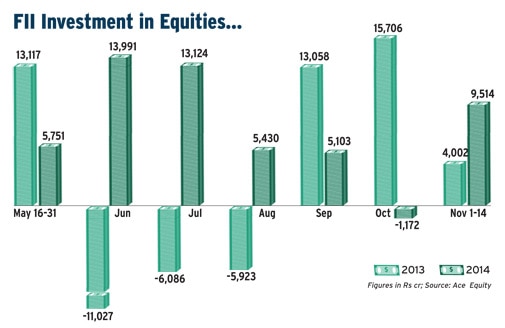 Shares of telecom service providers Bharti Airtel, Idea Cellular and Tata Communications rose 16.5%, 15.30% and 47%, respectively, after May 16 till November 12.

Mariam Mathew, associate vice president and head, Chola Securities, says, “The telecom sector is turning around as competition ebbs and realisations improve due to trimming of promotional offers and discounts. The increase in the share of value-added services, or VAS, has resulted in a rise in revenue per minute or RPM.”

“Reduction in the number of players gave pricing power. This boosted sentiment. Now a lot depends upon the upcoming auction of spectrum. Idea Cellular can give up to 40% returns in the next 12 months,” says Prakash Diwan, director, Altamount Capital Management. 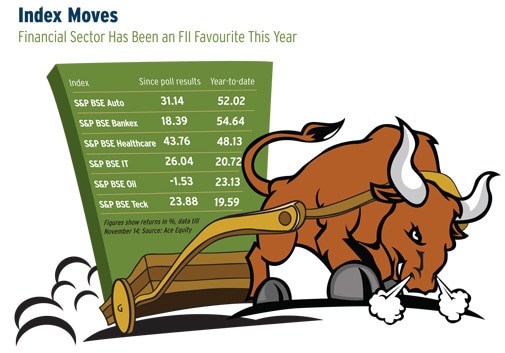 An Edelweiss Securities report says that in the near to medium term the sector will be buoyed by better-than-expected realisations and surge in volumes. Exponential surge in data use and fewer promotional offers will help companies increase cash flow and, thereby, pare debt. “We continue to remain positive on Indian pharma companies due to growth in the US generic market through new launches. We expect generic injectables, dermatology, controlled substances and oral contraceptives to remain medium-term growth drivers there. We also expect more acquisitions and believe that a higher share of revenue from India and other emerging markets will support growth,” says a UBS report. FIIs increased stake in Aurobindo Pharma (from 21.17% to 23.74%), Natco Pharma (11.46% to 16.63%) and Torrent Pharmaceuticals (10.54% to 12.83%) in the four quarters till September this year.