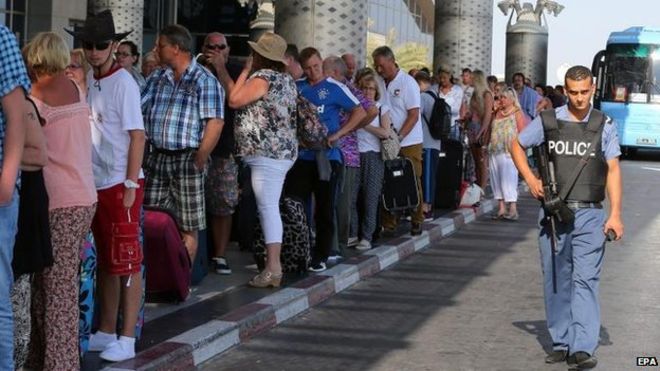 Travel firm Thomas Cook has said its full-year profits will be hit by about £25m because of the impact of recent events in Tunisia and Greece.

It said bookings for the July-to-September quarter had been affected by last month’s attack on a tourist beach on Tunisia.

Worries over Greece’s possible exit from the euro had also hit trading.

The company added that the strength of the pound against the euro was also likely to affect earnings.

Thomas Cook said the effect of the attack in Tunisia, when 38 holidaymakers were killed including 30 Britons, would cost it £20m.

It said this included the costs of cancelled trips and repatriating customers to the UK, as well as changing routes to alternative destinations.

“Since the end of the third quarter, our business has been impacted by significant external shocks,” said Thomas Cook chief executive Peter Fankhauser.

“In response to the tragic events in Tunisia, we acted swiftly and decisively, evacuating more than 15,000 guests on approximately 60 flights and sending special assistance teams to offer logistical and compassionate support to customers and staff.

“In Greece, our local teams have worked diligently to ensure that economic issues do not disrupt our customers’ holidays.”

Thomas Cook’s comments came as it reported operating profits of £3m for the April-to-June quarter, an improvement from a £42m loss a year earlier.

It also said that, despite the impact of the events in Tunisia and Greece, it expected full-year profits to grow once the impact of currency movements was stripped out.

However, it said the impact of the strengthening of the pound against the euro and the Swedish krona would now be £39m, up from previous estimates of £25m.

Last month, Thomas Cook announced that former Sainsbury’s boss Justin King would lead an independent review into the travel company after two children died on one of its holidays.

Christi and Bobby Shepherd died from carbon monoxide poisoning at a hotel in Corfu 2006, and Thomas Cook received fierce criticism over its response to the deaths.