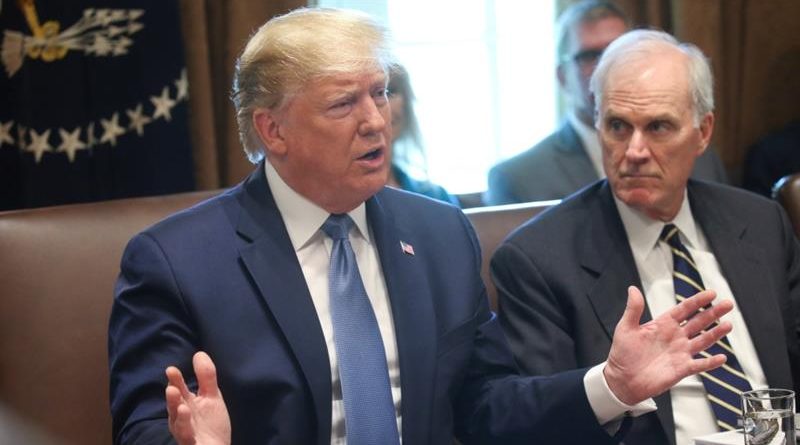 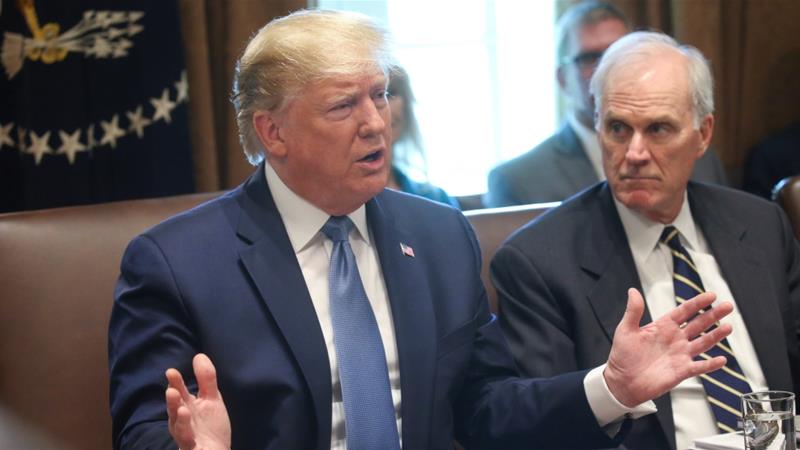 The United States is not pushing to topple Iran’s leadership, President Donald Trump said, adding “a lot of progress” has been made to ease tensions that recently threatened to ignite a war.

His comments on Tuesday came after Iran’s Supreme Leader Ayatollah Ali Khamenei vowed to keep rolling back commitments under the landmark 2015 nuclear deal abandoned by the US last year.

Trump responded that Washington is determined to stop Iran from acquiring nuclear weapons.

But he added: “They can’t have a nuclear weapon. They can’t be testing ballistic missiles.”

Trump did not elaborate on the “progress” made, but US Secretary of State Mike Pompeo said at the same cabinet meeting that Iran had said it was prepared to negotiate over its missile programme.

Pompeo told the meeting Tehran had “for the first time” signalled it would discuss the missiles, suggesting this was the result of US economic pressure.

However, that contention was quickly refuted by Iran’s representative to the United Nations. “Iran’s missiles … are absolutely and under no condition negotiable with anyone or any country, period.”

Trump pulled the US out of the historic accord with world powers aimed at curbing Iran’s nuclear programme last year, hitting Tehran with crippling sanctions that it calls “economic terrorism”.

Tensions have soared since Trump abandoned the accord, with the US calling off air attacks against Iran at the last minute last month after Tehran shot down a US drone.

Washington also blames the Islamic Republic for a series of attacks on tanker ships in the Gulf.

“We have started to reduce our commitments and this trend shall continue,” Khamenei said in remarks carried by state television.

He has previously upbraided European powers for not standing up to Trump and circumventing his sanctions noose. Russia and China are also parties to the accord.

But it was the first time Khamenei explicitly pledged to press ahead with breaches of the nuclear deal, spurning European appeals to Iran to restore limits on enrichment aimed at obviating any dash to develop atomic bombs.

Iran denies any intent to acquire nuclear weapons, and has said all its breaches could be reversed if Washington returned to the 2015 deal and its economic dividends were realised.

“Western governments’ major vice is their arrogance,” Khamenei said. “If the country opposing them is a weak one, their arrogance works. But if it’s a country that knows and stands up against them, they will be defeated.”

After the threats from Ayatollah Khamenei, Trump struck a conciliatory note, saying the US wanted to help Tehran.

“We’ll be good to them, we’ll work with them. We’ll help them in any way we can, but they can’t have a nuclear weapon.”

Washington has since reimposed draconian sanctions to throttle Iran’s oil trade in a policy of “maximum pressure” on Tehran to agree stricter limits on its nuclear capacity, curb its ballistic missile programme, and end support for proxy forces in a Middle East power struggle with US ally Saudi Arabia.

The Islamic Republic has repeatedly ruled out negotiating under sanctions duress from Washington. It has long said its ballistic missile programme is defensive and non-negotiable.