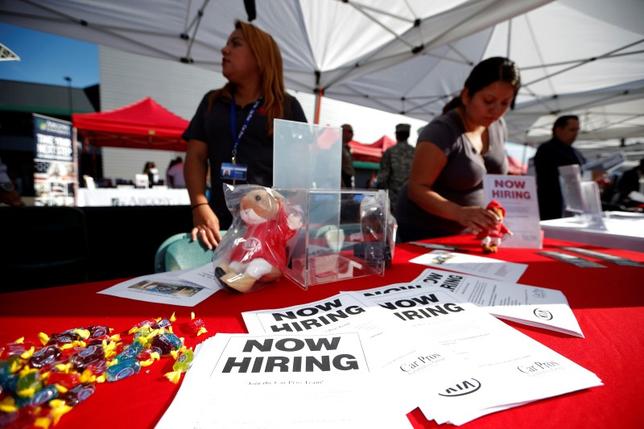 The number of Americans filing for unemployment benefits unexpectedly rose last week, but remained at levels associated with a healthy labor market.

Other data on Thursday showed import prices tumbled in December for a sixth straight month, weighed down by lower oil prices and a strong dollar. The data pointed to tame consumer prices that could keep inflation this year below the Federal Reserve’s 2 percent target.

Initial claims for state unemployment benefits increased 7,000 to a seasonally adjusted 284,000 for the week ended Jan. 9, the Labor Department said. Still, it was the 45th consecutive week that claims remained below the 300,000 mark, which is associated with strong labor market conditions. That is the longest such stretch since the early 1970s.

“Claims are still low from a historical perspective, and we see little evidence in this morning’s report to suggest anything other than healthy labor market separations,” said Jesse Hurwitz, an economist at Barclays in New York.

Economists had forecast claims slipping to 275,000 last week. The increase likely reflects volatility as the data is difficult to adjust during holidays. Claims also tend to increase at the start of each quarter.

The four-week moving average of claims, considered a better measure of labor market trends as it strips out week-to-week volatility, rose 3,000 to 278,750 last week.

U.S. financial markets were little moved by the data. Stocks on Wall Street were trading higher in choppy trade, while U.S. Treasury prices were mixed. The dollar firmed slightly against a basket of currencies.

The labor market has largely shrugged off weakness in the economy, with nonfarm payrolls surging in December. Economic growth has been hit by dollar strength, tepid global demand, efforts by businesses to slim an inventory bloat, and spending cuts by energy companies.

In another report, the Labor Department said import prices decreased 1.2 percent last month after dropping 0.5 percent in November. Import prices have now declined in 16 of the last 18 months. For all of 2015, import prices fell 8.2 percent, the largest calendar-year decrease since 2008.

With the dollar continuing to rise and oil prices hovering at 12-year lows, consumer inflation will probably remain benign this year.

Economists say modest inflation together with slowing domestic and global growth could make the Fed cautious about increasing interest rates at its March policy meeting, despite tightening labor market conditions.

“Import prices should continue to exert a drag on domestic inflation in the first half of 2016. The incoming data continues to provide uncertainty over the likelihood of a rate hike in March,” said Sam Bullard, a senior economist at Wells Fargo Securities in Charlotte, North Carolina.

The U.S. central bank last month raised its benchmark overnight interest rate by a quarter of a percentage point to between 0.25 percent and 0.50 percent, the first rate hike in nearly a decade.

The dollar’s 21.7 percent appreciation against the currencies of the United States’ main trading partners over the last 20 months has made imported goods cheaper. The report also showed export prices dropping 1.1 percent last month after sliding 0.7 percent in November. Export prices fell 6.5 percent in 2015, the largest calendar-year drop since the index was first published in 1983.