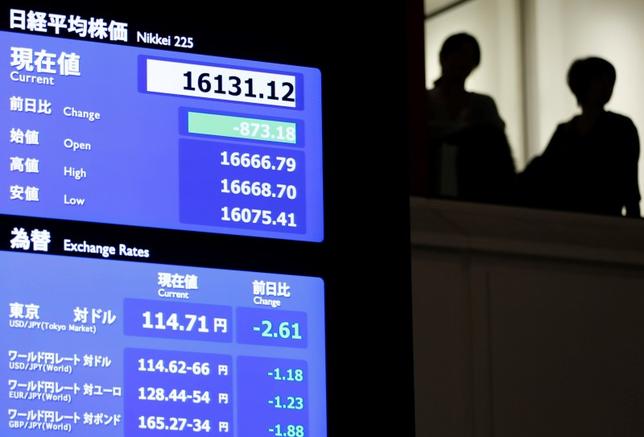 Visitors stand next to an electronic board showing the Japan’s Nikkei average (top) and the Japanese yen’s exchange rate against the U.S. dollar at the Tokyo Stock Exchange (TSE) in Tokyo, Japan, February 9, 2016.
REUTERS/ISSEI KATO

Financial markets that predicted eight of the last six recessions may be yet be wrong again, but market stress itself is now part of the calculus and leaves the world more open to left-field shocks.

Given the violence of this year’s slump in equities, where more than $8 trillion has been wiped off global stock market values, it is remarkable how few economists still see recession as the most likely outcome.

Yet more and more believe it will be a close-run thing; protracted market volatility itself could well tip the balance and investors are in no mood to hang about for a confirmation.

Anxiety is high, with few extraordinary policy measures now likely or even available, and more negative interest rates in Europe or Japan seen by many as part of the problem rather than the solution for a bruised banking system.

It may take a nervy few months for clarity on whether the worrying slide in global industry, trade and investment late last year has deepened, or to see if indebted consumers and a still-growing service sector will save the day.

While they wait, investors are scrutinising the many geopolitical risks and systemic concerns that would typically be ignored in periods of more robust growth, but which may now be magnified as additional threats to businesses’ and households’ investment or spending plans.

In cutting its world growth forecast for this year to 2.7 percent from 3.1 percent – still above the 2-2.5 percent level many see as a baseline to avoid an effective per-capita global recession – Axa Investment Managers flagged concern about systemic as well as cyclical risks for markets in this climate.

“When global growth is so sluggish, when corporate profits are so miserable, when pay rises are so small – you don’t need a very big shock to disturb global markets significantly,” said Eric Chaney, Chief Economist at French insurer Axa.

A sudden change of financial and economic policy thinking within China’s ruling communist party was one possible shock it outlined. The political and central banking dilemma surrounding the euro zone’s incomplete banking union was another soft spot.

But on a knife edge in terms of probabilities is a referendum on Britain’s possible exit from the European Union, likely to be held by the end of June. For AxaIM, this contains huge uncertainties for world financial markets, for Britain as a top five world economy and the wider EU as a durable construction.

“London is the number one financial centre, for example. If there was any destabilization of the financial industry in the UK, it would transmit quickly around world markets,” said Chaney, adding that this went beyond location and into questions about the extent to which English law, which dominates global financial contracts, is influenced by EU law.

But is the world in a better place than markets let on?

Some banks, such Morgan Stanley and Societe Generale, put the chances of a global recession this year at about one-in-five. Others, such as Citi, say the risk is rising all the time. Bank of America Merrill Lynch sees a 20 percent chance of a U.S. slump.

Whoever you believe, recession is no longer off the radar. The energy shock saw world industrial activity barely grow at all in 2015 and it tailed off alarmingly in the back end of the year.

World trade growth too has stalled as China splutters, and huge annual drops of between 11 and 18 percent in Chinese exports and imports in January should ring more alarm bells. Global shipping freight prices have collapsed to record lows.

Yet, JPMorgan points out that since 1970, global factory output has slowed to a near-halt year 12 times but only six were associated with subsequent recessions. And services, while weakening, are still expanding at least.

Stock markets, on the other hand, appear to have priced in a recession already. “Equity markets are correcting lower only a little more aggressively than in the past if we assume that a global recession starts this year and finishes mid-2017,” according to Citi strategist Jeremy Hale.

So, is this prescient or just cautionary?

More often than not U.S. equity market drops of 15-20 percent over a year do pre-empt recessions. But they’re not infallible. Alliance Bernstein points out that similar drops over six month periods were recorded in 1988 and 2002 without a subsequent downturn.

Forecast corporate profit declines this year anywhere between 7 and 10 percent might justify equity market fears. But, here again, JPMorgan research shows there have been periods in the 1960s, 1980s and 1990s where profits and markets peaked and then both rebounded quickly without recessions.

The worrying difference back then was each episode was met with sizeable policy easing that is harder to execute now.

And it’s not just equity fright. Corporate bond spreads have moved more squarely into recession territory, according to JPMorgan, and currency and commodity price movements have by now completed their average trajectory of the last six recessions.