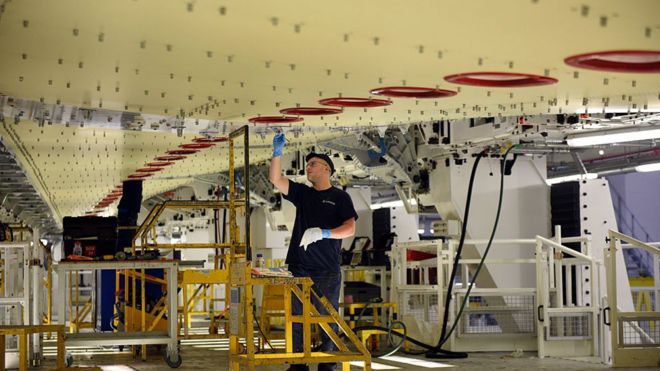 The aerospace industry could be damaged if Brexit introduces delays in how companies deal with cross-border supply issues, MPs have warned.

The sector employs 12,000 people in Wales, turning over more than £5bn.

MPs on the Business, Energy and Industrial Strategy Committee made the comments in a new report.

The Department for Business said it was “committed to making sure the UK aerospace sector remains competitive” after the UK leaves the European Union.

MPs on the committee want UK ministers to ensure investment in the industry is not delayed by uncertainty about the future relationship with the EU.

It is a major, fast-growing industry in Wales, with engine maintenance bases, seat manufacturers and thousands employed by Airbus alone at its wing factory in Broughton, Flintshire.

MPs examining the issue took evidence from a wide range of organisations and concluded future tariffs between the UK and Europe would not be a significant concern after Brexit because the UK is part of a World Trade Organisation agreement on civil aircraft trade.

However, they concluded that in what has become a globalised industry, with complex cross-border “just-in-time” supply chains, there would be damage if the movement of goods was delayed by more paperwork.

The aerospace industry employs about 120,000 people in the UK and generates about £28bn worth of exports.

The committee’s report also concluded the industry had nothing to gain from breaking away from existing regulations and it was in the UK’s national interest to remain in the European Aviation and Safety Agency – which overseas rules on industry and passenger plane safety.

It echoes calls earlier this year by the industry’s main trade body ADS to retain membership of the agency over fears there could be widespread disruption to air travel if the UK left.

A Department for Business spokeswoman said: “The prime minister has said that we want to explore the terms on which the UK could remain part of the European Aviation Safety Agency and we will continue to work closely with aerospace companies, ensuring they can continue to benefit from a frictionless trading environment.”