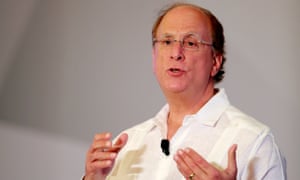 Among the 3,000 politicians, business leaders, economists and celebrities attending this year’s World Economic Forum in Davos will be a 64-year-old with receding hair and rimless glasses.

The academic demeanour of Larry Fink belies his role running BlackRock, an outfit he founded 30 years ago and which has become the biggest fund manager on the planet, overseeing $5.1tn (£4.2tn) of investments for pensioners and savers.

The sheer size of the operation – the UK economy is worth £1.8tn – puts Fink at the helm of an international powerhouse, with tentacles across markets for stocks and bonds around the globe.

Shakira and Joe Biden get Davos 2017 under way, as Brexit fears hit pound – as it happened

In the UK alone, BlackRock is usually found among the top three shareholders in FTSE 100 blue-chip companies. Last week it pipped the UK government to become the biggest investor in Lloyds Banking Group.

While Fink makes regular appearances at major events such as Davos – this year he is to opine on the global economy – BlackRock is not known for its public pronouncements. It does not provide specific detail on its shareholdings in each company or offer opinions on individual investments.

However, there are signs that it may be about to become more vocal in public after its UK arm fired off a letter to the boards of the biggest 350 companies listed in London to urge them to rein in executive pay.

Signed by Amra Balic, its head of investment stewardship in Europe, the letter says: “We consider misalignment of pay with performance as an indication of insufficient board oversight, which calls into question the quality of the board. We believe that shareholders should hold directors to a high standard in this regard.”

The accompanying document puts board members on notice that they could face protest votes at annual general meetings.

Balic had signalled the letter was being prepared last month when she appeared before MPs on the Commons business, energy and industrial strategy select committee, which is examining corporate governance at a time when Theresa May has put executive excess back on politicians’ agenda.

BlackRock should carry clout, not only because of its size but also because 90% of its investments in listed companies are through tracker funds – positions it cannot sell even if it does not like the management.

In the 12 months to the end of June, it voted against 7% of pay-related resolutions, including Sir Martin Sorrell’s £70m pay deal at WPP and companies where pay deals were voted down such at engineering company Weir Group and the medical equipment group Smith & Nephew.

This expertise in index-tracking – known as passive investment – helped it win business in 2016, when it attracted $202bn of new funds.

BlackRock was launched in 1988 when Fink and seven others set about creating a fund management house that specialised in investing in bonds, with the support of the Blackstone private equity firm.

It was part of the US financial firm PNC by 1995 after Fink parted ways with Blackstone’s Steve Schwarzman. BlackRock floated in New York four years later and, apart from taking a dive during the 2008 financial crisis, its share price has been on an upward trajectory ever since.

A series of deals followed, notably including with Merrill Lynch over its fund management arm in 2006, and later the acquisition of Barclays’ fund management arm in the depths of the financial crisis. The takeover of Barclays Global Investors in 2009 brought with it iShares, a business that specialises in exchange traded funds (ETFs) that track markets. There have been concerns that funds such as these could create systemic risks by accentuating market moves during times of stress.

BlackRock is also known for a risk-management system known as Aladdin, used to monitor risks posed by changes to interest rates and other factors that can affect the value of investments.

Last year, it came under fire for failing to clamp down on boardroom excess. Steve Silberstein, the founder of computer company Innovate Interfaces, took issue with BlackRock’s voting record in the US and started a petition to urge the company to take a more aggressive approach. His resolution at BlackRock’s annual meeting last year got the support of just 4% of shareholders.

In the UK, BlackRock’s rivals wonder whether the $26m paid to Fink last year will stand in the way of its calls on leading companies to rein in excess. Insiders rubbish the idea – and point out that measuring impact by voting records does not take account of the behind-the-scenes talks with companies to avert showdowns at annual meetings.