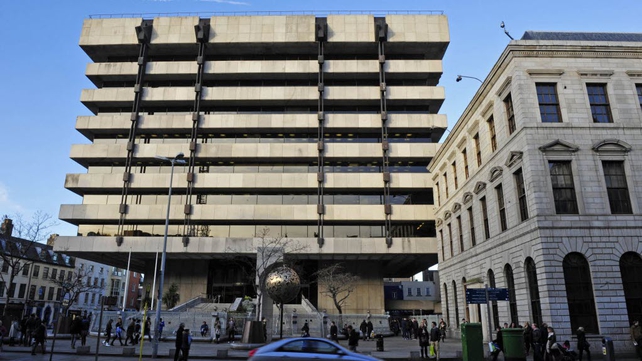 These risks include the situation in Greece, weak economic growth in the Euro area, rising tensions between Russia and Ukraine and a more aggressive rise in US interest rates.

In its latest Macro Financial Review – a twice yearly assessment of risks to the economy and financial stability – the bank said the domestic economy could grow faster than its forecast 3.8% this year.

But it also warned that still high public and private debt levels leave the economy vulnerable to sudden changes in sentiment.

The Central Bank said the non-financial corporate sector of the economy has a debt level of 185% of GDP, substantially higher than the euro area level of 110%.

It also noted the very rapid growth rates in commercial property, and cautioned banks not to over-lend to the sector.

The bank said that total returns from Irish commercial property in the year to March were up 36.3% year-on-year. Capital values in the sector have risen 27.9% in the same period.

Today’s review also contains a warning that a shortage of office space is emerging in the Dublin market.

The Central Bank said new office space which will become available before the end of 2016 will add just 1% to the current stock, raising concerns about a supply shortage and further growth in rents.

Last year investment in Irish commercial property was €4.5 billion – an all time record, and some 40% higher than the previous peak in 2006.

But the Central Bank warned that the rapid rise in rents and capital values could lead to an excessive amount of supply in the medium term and a risk of a future price crash in the commercial sector.

It also warned that a large amount of impaired commercial real estate portfolios remain to be sold by Irish banks and NAMA, and that a change in economic conditions could adversely affect this process.

It said that Irish banks should not over-lend to the commercial real estate sector when the sector is still working through very large losses from the previous property bubble.

The Central Bank also had strong words of warning about the insurance sector. Ireland has a very large insurance industry relative to its size, much of it based in the international financial services centre in Dublin.

The bank said that the low interest rate environment is having an adverse impact on the ‘Variable Annuity Life Assurance’ companies, which mainly export their products to other European countries.

It said the “long run sustainability of the VA business model is unclear, given the unprofitable book of existing business and the difficulties posed in offering new product s which are profitable and also attractive to policy holders”.

The bank said the introduction of new rules governing the insurance industry – know as Solvency II – could restrict the type of investments Insurance companies make and leading to lower levels of profitability.

It also warned that expected legal changes in the way insurance companies pay out high value claims could further impact on profitability in the sector.

It also noted that Ireland has the second highest number of re-insurance firms in Europe, generating €15.4 billion in premiums last year.

While this sector has been profitable, the Central Bank sees a possible risk form overcapacity putting downward pressure on prices and a weakening of terms and conditions.

It said the challenging operating conditions have led all the major credit ratings agencies to rate the outlook for the sector as negative.

Overall, the Central Bank warned that any adverse developments in the Irish resident non-bank financial intermediary sector could cause reputational damage.