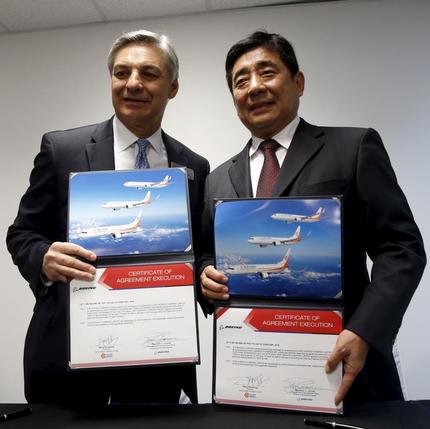 China’s Okay Airways has signed a commitment for 12 Boeing (BA.N) 737 jets worth $1.3 billion at list prices, as the privately owned carrier looks to expand its fleet to tap the mainland’s growing air travel market.

The order includes 11 737 Max jets, the upgraded version of Boeing’s narrowbody aircraft line. The deal was signed at the Singapore Airshow.

The agreement also includes options for another eight 737 Max planes, Boeing said in a statement.

The order is not part of the deal that Boeing signed with China last year to supply 300 aircraft worth $38 billion at list prices, Wang Shusheng, the company’s chairman, told reporters on Wednesday.

Okay Airways, China’s first privately owned airline, currently has a fleet of 18 aircraft, and expects to grow the fleet to 80 by 2020.

Wang also said the airline was looking into purchasing wide-body aircraft, which would account for about 30 percent of the total capacity by 2020, to accommodate longer routes in future.

The company said it would make a decision on the wide-body aircraft later this year.

“Next we would like to use wide-body aircraft to fly to destinations that exempt visa requirement for the Chinese,” said Wang.

Wang said his airline would soon start flying to Osaka, and is in discussion with authorities on opening new routes to popular tourist destinations in Japan.