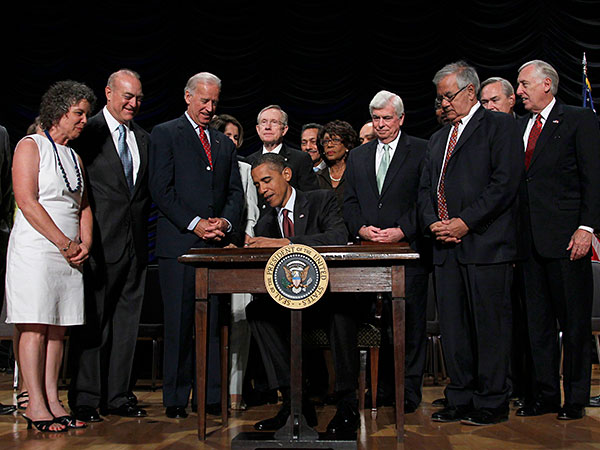 Credit unions are thriving. More than 100 million Americans are members – an all-time high. Credit unions are making more loans and holding more savings than ever before. And by competing aggressively with banks, credit unions are saving consumers $10 billion a year on fees, interest rates, and the like.

That may not be the case for much longer.

Regulations aimed at reining in Wall Street are instead walloping credit unions. Meanwhile, 40 percent of the rules prescribed by the 2010 Dodd-Frank financial reform law have yet to be finalized. So the regulatory choke hold on credit unions will only grow tighter.

Federal officials must ensure that their efforts to ward off another financial crisis do not prevent credit unions from fulfilling their mission of providing affordable financing to Main Street businesses and middle-class families.

Credit unions differ from Wall Street banks because they are member-owned and not-for-profit. Their lack of overhead and focus on people instead of profits helps them offer better rates and cheaper fees than nearly any bank.

Most credit unions are community-based, so they know their members personally. That makes a huge difference when families fall on hard times.

In the wake of the financial crisis, big banks cut back on lending. But credit unions served as a safe harbor for families and small businesses. They continued to lend when others pulled back.

This personal connection explains why “members rate credit unions higher than banks on nearly every aspect of the customer experience,” according to the latest American Customer Satisfaction Index survey.

But credit unions and community banks have been caught in the cross fire as regulators target the predatory and profit-driven practices of Wall Street’s mega-banks. Since the beginning of the financial crisis, 15 different federal agencies have subjected financial institutions to more than 190 regulatory changes totaling nearly 6,000 pages of rules.

These regulations aren’t aimed at credit unions. Nonetheless, they’ve saddled them with huge compliance costs. To keep up with the rules, credit unions have had to add staff, change internal policies and controls, design and print new forms, update computer systems, and help their members understand all these changes.

First Heritage Financial, a credit union-owned subsidiary based in Trevose, in Bucks County, reports that it has had to add three full-time employees to keep up with regulatory changes required by Dodd-Frank, the Consumer Financial Protection Bureau, and Fannie Mae. More than 8 percent of the money First Heritage spends on salaries covers pay for folks whose sole job is to ensure that it complies with these new rules.

It’s not realistic to ask the average credit union to comply with the same regulations as the likes of JPMorgan Chase, Bank of America, and Citibank. Almost half of credit unions have five or fewer employees. At some large banks, the compliance department alone is 100 times bigger.

The rules are also raising costs for consumers. First Heritage has seen the costs associated with a typical loan – for things like credit scoring, fraud alerts, data verification, and tax transcripts – increase 250 percent. That translates to an additional $1,000 in charges for a standard loan.

Regulators seem oblivious to the effects of these rules. Not a single agency has calculated the burden that federal regulations are imposing on credit unions. That’s why the Credit Union National Association – the organization I lead – has begun quantifying regulatory costs. Our research will demonstrate how excessively broad rules negatively affect community lenders.

Fortunately, relief may be on the way. The Senate Banking Committee, chaired by Sen. Richard Shelby (R., Ala.), and the House Financial Services Committee, chaired by Rep. Jeb Hensarling (R., Texas), recognize that laws intended to police Wall Street must not smother Main Street lenders under a one-size-fits-all regulatory blanket.

At the top of their agenda should be reform of the Federal Credit Union Act to allow credit unions to make more loans, especially to small businesses. Credit unions have been subject to arbitrary lending caps since 1998. Those caps need to go. That would create hundreds of thousands of jobs.

For more than a century, credit unions have partnered with Americans to finance home purchases, start businesses, and secure their financial futures. Congress must free these community lenders from unnecessary and harmful regulations so they can continue ensuring America’s economic prosperity.