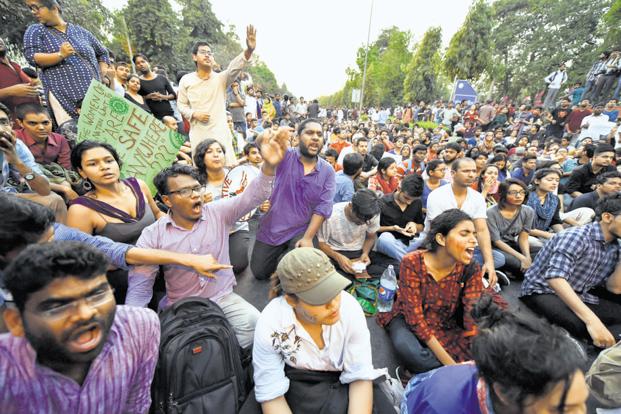 New Delhi:A makeshift tent has been set up behind the signature red brick Central Library building of the Jawaharlal Nehru University (JNU). Slogans written on colourful placards are pinned on to the white fabric enclosures where teachers are sitting in protest. It’s bearable in the shade, though the air is already warming up in anticipation of Delhi’s scorching summer.

A couple of teachers are immersed in a chess game. Beside them is a table laden with lemons and stacked paper cups, presumably for making nimbu paani, to keep the teachers on a 72-hour hunger strike hydrated. The strike, led by the JNU Teachers’ Association (JNUTA), is in its third day, and vice chancellor Mamidala Jagadesh Kumar has so far refused to give them a hearing.

“He didn’t even bother to come here to talk to us,” says Pradeep Shinde, a former secretary of JNUTA and an assistant professor at the School of Social Sciences. Shinde is one of the three teachers on satyagraha—a three-day hunger strike, joined by about 100 students on a relay hunger strike.

Their list of grievances includes the decision to remove deans and department chairpersons allegedly opposed to the compulsory attendance system, massive cuts in research seats, staff appointments, abolishment of a points system that facilitated the entry of women students from backward areas and an “attack on academic autonomy, pedagogical freedom and an attempt at repression of dissent”.

“This is one form of protest; we’ll do whatever it takes, even at personal cost,” says Shinde. “I’m OK, a doctor has come to check and everything,” he adds with a smile. “Administration” is a word that comes up frequently, spat out with suspicion and contempt, in any conversation with protesting teachers and students. The fault lines run deep between the two sides.

These days, a litany of protests guide visitors around key areas inside the sprawling campus. At 4pm, the School of International Studies’ students are sitting on a dharna against seat cuts; at 5pm, JNUTA is holding a press conference at the North Gate for the reinstitution of the Gender Sensitization Committee Against Sexual Harassment, and women who have reported professor Atul Johri for alleged sexual harassment are gathering at the Students’ Activity Centre at 2pm. The sounds of makeshift drums and anti-admin chants can be heard from the Administration Block on days students are protesting against the attendance system. Security guards mill about keeping a watchful eye on things.

Add the recent decision by the University Grants Commission to approve full autonomy for 62 higher educational institutions, including JNU, to the university’s exhausting cycle of protests, and there’s palpable tension in the air.

Union human resource development minister Prakash Javadekar called the decision “historic” and likened it to the 1991 liberalization of the Indian economy.

There’s already apprehension among the teachers.

“I have been here for the last 12 years as faculty,” says Moushumi Basu, who teaches at the Centre for International Politics, Organization and Disarmament, School of International Studies. “Universities should change for better, but this one has changed for the worse. Ever since February 2016, when Kanhaiya Kumar was arrested, there has been a concerted attack on JNU, and I think much of it has to do with the liberal atmosphere that exists in JNU, the kind of structures that are there that enable students from different walks of life to pursue good, quality education here at affordable prices.”

March has been a tough month for the JNU students. The constant cycle of protests has taken a toll on their physical and mental health, their parents are worried and every day is like going to war.

“We haven’t got a good night’s sleep in days. All of us are tired. Every day we are on the move, planning the next day’s protest,” says Geeta Kumari, president of the Jawaharlal Nehru University Students Union (JNUSU). Kumari, a 24-year-old M.Phil student of modern history from the School of Social Sciences, says for the past two-and-a-half years, the students have had no peace of mind.

“Padne nahi de rahe hai yeh log (they’re not letting us study),” she says. “Ask any student, they’ll say the same thing. This is mental harassment. We’re tired of fighting this battle. I can’t tell you how depressed I feel. In my house, there’s never been a culture of daily phone calls. Now my mother calls every day just to make sure I’m OK.”

They need time to heal, rest and regroup. But the students of JNU, on a war path with the vice chancellor, have not had that time as a wave of changes, which some of the protesting students and faculty have termed draconian and unilateral, have hit them. The situation is suffocating, but protest we must if we want to survive, says Kumari.

The toll is as much emotional as it is physical. The identity of one of the complainants who accused Johri of sexual harassment, was allegedly revealed during a TV talk show. She now faces the inevitable moral scrutiny that follows such cases in India.

Students who took out a rally demanding the arrest of Johri were baton-charged and sprayed with water cannons—a crowd-control device usually reserved for rioting. In its defence, the Delhi Police says the students tried to break through the barriers set in place to stop their march. In the storm of slogans, studio debates and political glare, it’s easy to lose sight of the fact that some of the protesting students are 24- and 25-year-olds with no previous experience of political protests or living under constant media limelight.

Some of them, who’ve grown up in small towns and never had their patriotism questioned, are bewildered at the label of “anti-national” now casually tossed at them in online conversations. Not all students even identify with the Left ideology. The term “Urban Naxal” is a bit of a running joke on the campus. “Right. We’re all Naxalites and anti-nationals now, a whole university full of us,” says a student, who does not want to be named.

“Some of these people who’ve never been seen outside of their library are now out on the streets,” says Kumari. Some of the students come from the interiors and worried parents dread seeing their children caught in the violence.

Parents are now asking to join the protest

“A student’s mother said she was willing to come and join the protests on campus. It’s come to this now,” says Kumari. She has her MPhil submission this year and rues the fact that she hasn’t had a minute to spend in her room or read a book. Every day, the next day’s protest itinerary has to be decided. A constantly hostile atmosphere has its own cost. The students are mentally exhausted but there’s no end in sight. The administration is as determined to push through the new measures as the students are to resist them.

Kumari says JNU has always been intellectually sound, and politically set in its ideology. Its politics has never interfered with its pursuit for excellence. The government ranked it as the second-best university in the country. What is happening now is unprecedented.

Those in the forefront of the protests have received terse circulars from the administration. The teachers are not immune either. Not all of them want to speak openly against the administration. “I’m OK to talk on camera,” says Ghodajkar Prachinkumar Rajeshrao, a professor at the Centre of Social Medicine and Community Health, while some of his colleagues shy away, fearing retribution, noticing the camera in my hand.

“These strikes have taken a toll on us teachers, too. Academics has suffered. And now, what they have introduced recently under the garb of autonomy for higher educational institutions, is an euphemism. They are saying in soft words that this is privatization of all public universities, where the rich who can afford the fees will get an education. In JNU, students from underprivileged background will be screened out,” says Rajeshrao.

“The state is abdicating its responsibility towards citizens,” says Mohinder Singh, a professor at the Centre for Comparative Politics and Political Theory, School of International Studies. Singh is part of the hunger strike by the teachers.

Perhaps most infuriating to the students is the vice chancellor’s response, or the lack of it. His Twitter feed is a serene collection of posts and reposts on Art of Living tips on growing vegetables, international visitors, musical performances and achievements of the students. Looking at it, it’s impossible to gauge the turmoil of which he’s perhaps an unwilling protagonist. A flurry of social media activity is observed only on the days when the students camp out in front of the Administration Block that houses his office. Repeated appeals go out from his Twitter account on those days.

Teachers say the ecosystem of a university, known for its liberal views and a culture of political activism, is fast changing. For many women research scholars, threatened with loss of their hostel seat on failing to sign the attendance register as mandated by the administration, it would mean a loss of a toe-hold in another predominantly male space. “When you shut down a place like this, you are shutting down upward mobility,” a 28-year-old MPhil student of international politics, who requested anonymity, said in an interview with Huffpost India in February. The attendance issue blew up into a huge movement probably because the university was simmering for a while and needed an outlet. “In another time, perhaps, it would have been handled differently. But it was the last straw,” says Kumari.

Sushmita Dev, Congress member of Parliament, who was present at the venue of the students’ march last week, says she’s never seen that kind of police presence at a students’ rally. “Protest is a natural phenomena, and it doesn’t matter whose government is in place… I was shell-shocked at the kind of police presence in Laxmibai Nagar; as if there were 20,000 people marching with guns or something,” she says.

In a game of who will blink first, it seems JNU is reeling under a storm of endless protests the administration is willing to ride out. But at what cost to the staff and students, even those on the side of the administration, only time will tell.