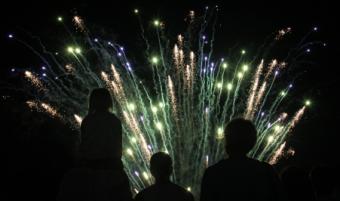 Poetry brings the sites, sounds, and even the smells of a fireworks display to life. The imagery in a good poem about fireworks elicits fond memories of fireworks past, as well as creates anticipation of displays yet to come. There’s also the excitement that comes with store-bought fireworks to consider, and this too can be expressed through imagery and rhymes.

The following poems capture the essence of a fireworks display, the adventure of a little firecracker thief, the pure joy a box of fireworks can elicit from a child, and the pride of an aerial firework.

Light Up the Sky

Stars and spangles light up the sky,
No wonder kids love the Fourth of July.
A boom, a trail of smoke, and then a loud pop,
As colorful sparkles fan out and drop.

One after another, each twinkles and dies,
Just a moment’s pause, and the next one flies.
Then all too soon comes the grand finale,
Wave after wave, like an electrified tsunami.

And then it’s all over and all is quiet,
There’s a stillness where there once was a riot.
And clouds of sulfurous smoke in the air,
Are all that’s left to show that fireworks were there.

There’s a firecracker in my pocket
That I snitched from my big brother.
I’m not supposed to have it, and
If he finds out I won’t get another.

My problem is I don’t know where
I should go to set it off.
If I do it close to home I know,
I surely will get caught!

So I’ll sneak over to the school yard,
And set my firecracker off there.
I’ll take my best friend Tommy,
‘Cause it’ll be more fun if I share.

Now we’re just about to light it,
But hey, what’s that I see?
It’s my big brother heading right for us,
And he looks pretty angry to me.

Hey, what are you doing there, dummy?
Did you steal that firecracker from me?
You’d better give it back right now,
Before you blow off a finger or three!

I see no other alternative,
But to drop my firecracker and run.
The only fireworks I see are in my brother’s eyes,
So I guess my thieving days are done!

A Gift of Fireworks

I’m floating on air,
I’m dancing with glee,
My dad bought a box
Of sparklers for me!

But wait, that’s not all.
Oh this is so cool.
He bought me some awesome
Cherry bombs too!

Now let me see what else
Is in this here box.
Omigosh, carbon snakes,
Wow, my dad really rocks!

And is that what
I think I see there?
One hundred bottle rockets
To shoot in the air.

There’s a brick of firecrackers,
I’m very happy to see.
Looks like plenty of Fourth of July
Fireworks fun for me!

I’m a little firework,
And I can’t wait to fly,
Up into the atmosphere,
And light up the dark sky.

Watch me and you’ll see
My colors, red, blue and green.
I’m sure you’ll agree I’m the prettiest firework
That you’ve ever seen!

Finding poems about fireworks can be a little challenging, but here are a few more that kids will enjoy.