Skip to content
COMPANIES
June 16, 2015 Joy Mitra 0 Comments entrepreneurs stepping up, for laying infrastructure without disturbing, it will look to rediscovering First it was the textile business. Then came petrochemicals and then oil & gas. Now, retail and telecom are the trend. Reliance Industries (RIL), India’s largest private sector company, has been changing its own focus to keep pace with the changing times.

“We don’t want be called a lala (traditional family-managed) company. Every five-to-six years, one has to re-discover. If we don’t, we will be lagging behind. Had RIL been a textile company even now, it would have perished like many other textile players have,” said an RIL official.

At RIL’s 41st annual general meeting last Friday, Mukesh Ambani, chairman and managing director, in his speech titled Hyper Growth Platforms of Value Creation, said retail and telecom would be the next big focus for the company. The firm plans to invest Rs 100,000 crore in these sunrise sectors.

Although RIL’s focus on new businesses has made the Street cautious, the Ambani-controlled firm says Jio and Retail are the new age India-centric consumer businesses that will not only have high growth potential but will also place RIL among the most valuable companies in the world.

This is a marked change for a company, which was identified by its petrochemicals and oil & gas business. Although refining and marketing continue to be a significant contributor to Reliance’s profitability, exploration & production (E&P) business has taken a back seat and currently is very small in RIL’s overall portfolio.

The contribution of the E&P business to RIL’s total earnings before interest, taxes, depreciation and amortisation (Ebitda) of Rs 31,835 crore last year stands at Rs 194 crore, or 0.6 per cent of the company’s Ebitda. 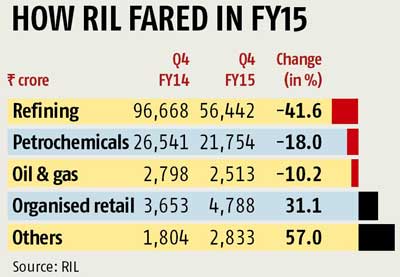 At the AGM, Ambani admitted that while creating huge economic value to the country, the domestic E&P business has generated shareholder returns lower than the cost of capital. “But there is value yet to be unlocked from 5-6 trillion cubic feet of resources discovered at various stages of development, appraisal and approval,” he added.

On the other hand, Reliance Retail, which operates across various product categories and formats has attained revenues of over Rs 17,000 crore last year with record profits of Rs 784 crore at an Ebitda level. The business achieved a compounded annual revenue growth of 31 per cent in the past five years.

RIL accelerated its pace of growth by adding 930 new stores last year, which effectively translates into introducing five new stores every two days. It currently has a network of 2,600 stores and presence in 200 cities across 20 states.

“We are committed to growing Reliance Retail and making it a significant part of our consumer business to generate societal and shareholder value,” said Ambani.

RIL, which till last year was not optimistic about the e-commerce segment in the country, will roll out its e-commerce initiative in the Fashion and Lifestyle formats of Reliance Retail this year. Its grocery segment already has an e-commerce presence, which RIL plans to scale up.

The company says it is the largest value retailer in the country, in terms of fashion, having built its own internal designing teams. “We are able to produce hundreds of designs internally. Earlier, the market had a couple of seasons in a store every year. Now we have 12 seasons in a year in our Trends stores. For e-commerce, we are going to have hundreds of new designs online,” an official said.

With Jio’s launch RIL’s wants to play a significant role in lifting India from its current 142nd rank on internet penetration to amongst the top 10 nations in the world.

RIL now has 18 per cent of India’s spectrum (across five bands), versus Bharti Airtel at 16 per cent. Its largest chunk is in 2300 Mhz, which has not seen many long-term evolution (LTE) launches globally due to signal strength issues that deemed it more suitable for data than voice.

“Tie-ups provide Jio access to 65 per cent of India’s 45 million towers. RIL’s asset-light strategy of tying-up with existing tower (and even fibre) providers ensures that back-haul network may not be a constraint,” said Macquaire Research in its report.

Although RIL has had to face problems from municipalities, housing societies, offices, etc for laying infrastructure without disturbing the existing ecosystem and addressing concerns around radiation, it has dealt with the issue innovatively by putting up mini-towers on existing street-light poles, traffic junctions, footpaths, etc.

While Jio is expected to do well in metros, scalability of the service in rural areas could be a challenge.

As Ambani rightly said Jio’s true success would be measured by a whole new generation of entrepreneurs stepping up to leverage the digital assets Jio has built. FY17 will tell how RIL fares on these two growth businesses. Or if it will look to rediscovering itself again.